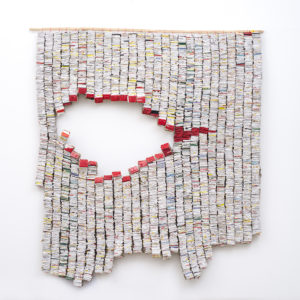 It is notoriously difficult to hit a moving target, for this device is, by its very nature, meant to challenge or even escape our reach. Whether it is understood as something that deliberately moves while someone is trying to hit it, or as an idea or situation that constantly changes while one is trying to make sense of it, a moving target defies easy access and full control. As the title to this exhibition of his most recent body of work, Mapondera is exploring his own experience of moving targets and the impact they have on the psyche of the Zimbabwean population. This is a critical return to a fraught socio-political environment, for Mapondera’s work engages with his home country and the governmental turmoil and financial instability Zimbabwean citizens face on a daily basis. 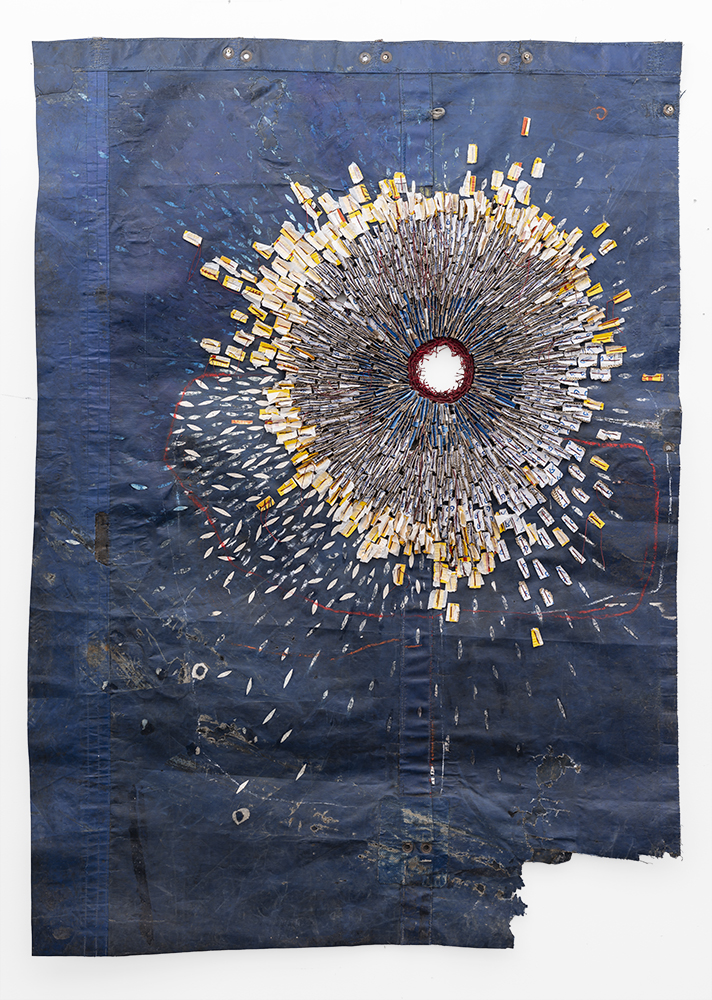 As Mapondera explains, the period of hyperinflation and financial instability under former president Robert Mugabe, which reached its peak in 2008, left Zimbabweans reeling from the shock of losing most of their investments and savings. Prices of commodities would change several times a day, which made it difficult if not impossible to acquire certain products and services. Even after Mugabe was ousted during a military coup in 2017 and replaced with current president Emmerson Mnangagwa, Zimbabwe’s economy remains extremely volatile. While Mnangagwa claims that the crisis-hit country is returning to normal, Mapondera’s work offers a counter-argument – one that shows how he, and other Zimbabweans, continue to live in an era of severe unpredictability and precariousness. In this context, the title of Mapondera’s exhibition activates an acute understanding of human aspirations towards stability and safety in times of uncertainty. 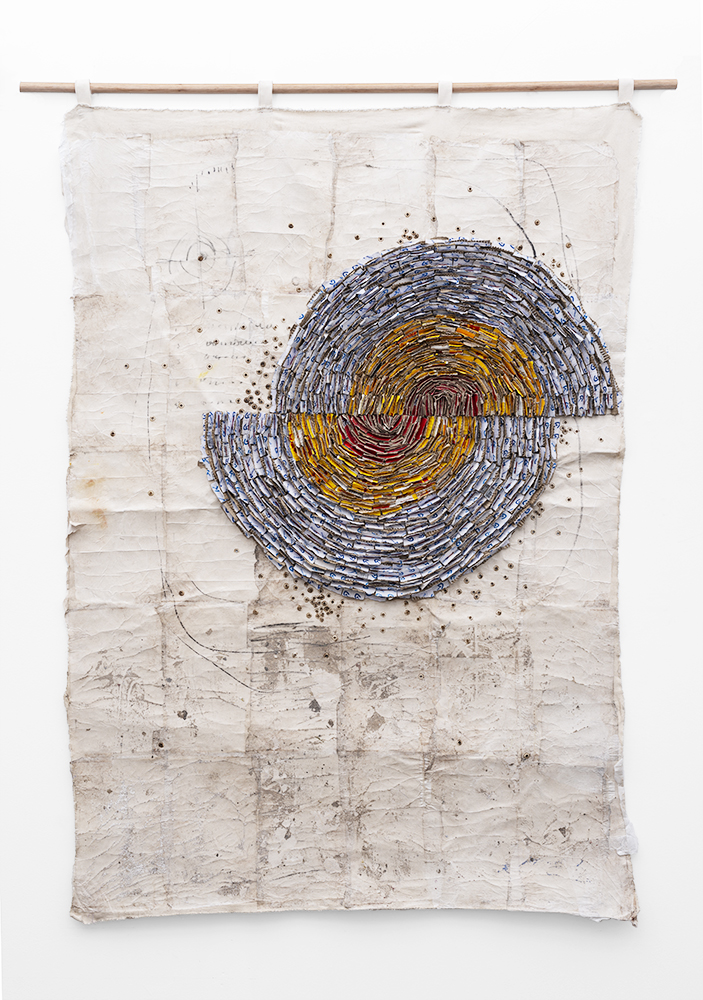 The distinctive materials that Mapondera uses in his work speak directly to these concerns: with pieces of cardboard meticulously sewn to one another, or onto sheets of canvas and tarpaulin, his work draws directly from the lives of the worker and the everyman. For these materials are the remainders of commerce – they come from and speak to the lives of street traders and market merchants. In their original form, these materials were meant to store, protect, shade and display the wares that were entrusted to them. But now, as the leftovers of trade, these scraps and fragments become the very tools that Mapondera employs to represent human desire and the way that it is wrought by forces of capital and flows of economy. 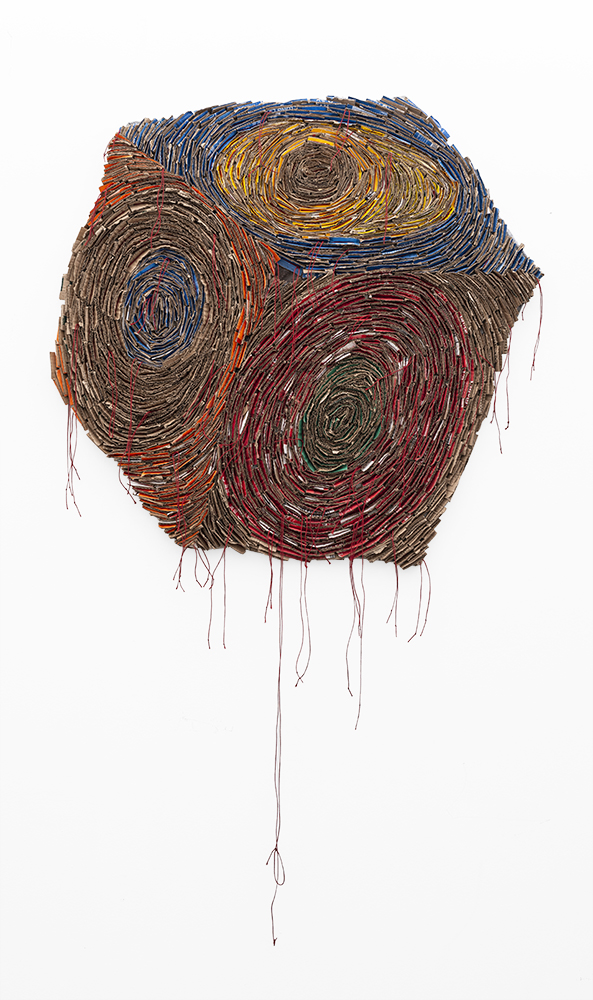 With an eye for detail, Mapondera’s work shows meticulous craftsmanship, which is carefully balanced with the conceptual undertones of the media that he uses. For example, much of the cardboard that he stitches together come from discarded food packaging. Of interest to Mapondera is the text that was originally printed on these packages and boxes (such as “100% Fruit Juice”, or other claims as to the purity or wholesomeness of the product). As a marketing strategy, such text is deliberately used by companies to sell their wares. However, these claims are often not completely true and, as Mapondera argues, we have grown increasingly suspicious of the way that products are packaged and sold to us. This provides a crucial link for his political commentary on the Zimbabwean context: in much the same way that companies might market their goods and intentionally misrepresent the content of their wares, Mapondera argues, politicians do exactly the same. Be it commodities or politicians, it all comes down to packaging. 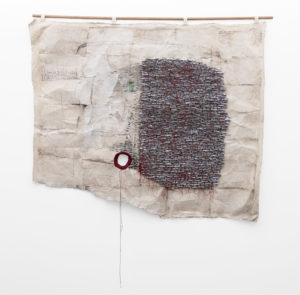 While such materials also bear the traces of a utilitarian life (of being used, handled and later discarded), Mapondera’s reclamation of them requires a process of slowly stitching pieces together, layer by layer, row by row, until the desired form is achieved. The circular shapes that are created by the sewn cardboard strips reference the visual iconography of the target – of the round, flat surface that is marked with concentric circles to be aimed and fired at. But these targets seem move in disruptive ways for, in his representation of them, Mapondera has them multiplied and conjoined, sliced in two, radiantly bursting open, or darting towards the outer edges of the canvas. The very nature of the material that he is working with (such as the distressed tarpaulin, unravelling red thread and scraps of cardboard) speaks directly to his own life experiences, as well as those of other Zimbabweans – of taking aim at something, of striving, working and crafting, whilst keeping some goal in mind. At the same time, it speaks of the difficulty to achieve such goals; of the way that they shift, are thwarted, or can be lost from sight.