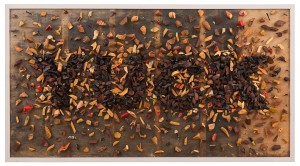 Text,context, subtext and pretext are prime areas of concern in the new solo exhibition by Willem Boshoff titled Oh My Word!
As the title implies, taking ownership of one’s actions also involves possessing the power to describe. Beyond the exclamation though we have the simple truth of Ludwig Wittgenstein’s remark, ‘Words are Deeds’.
The exhibition in its entirety addresses the question of whether words give us an acceptable reason to take action, or whether words themselves constitute action. 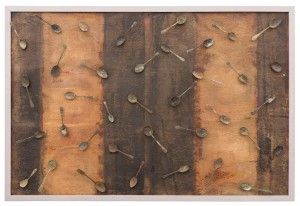 Fracking, extreme militancy, exploitation of people and land — all relevant issues that give rise to discussion and fury — are pictured in stratified sculptural compositions that combine a simple word or statement with found objects bearing some relation to the themes.
The mammoth site specific land intervention Earth Signal is consciously placed between the remnants of bushman rock art and a site of fracking in the Karoo. Here, in an arid landscape, Boshoff spelled out the words ‘piss off’ in stacks of burning wood.
The work reflects a recurring response that Boshoff received to a question he asked many people: ‘what would the earth say if it could speak back?
According to Boshoff, the reply was, ‘piss off’…or worse.

Now presented on video, the 240 square-metre Earth Signal was filmed with a helicopter drone, with six propellers, hovering 50 metres in the sky. The work took a week to construct out of 160 large bags of wood and 60 bales of straw. The burning involved 110 litres of fire gel and a drum of fuel.
When asked about the motivation for his action Boshoff said, ‘It’s about farting against thunder. Everybody talks about “stop fracking” – I just keep quiet and I go and burn a big thing and I make some trouble, real trouble. And then nothing happens.’
Other topical themes include war in the Middle East. In the collage Human Shield the word is spelled out in shards of broken crockery. Over the word, on a layer of clear Perspex, there are broken metal seals once used to secure armoury and other valuable items. This appropriation of domestic objects that no longer provide any safeguard evokes the remnants of war, both material and corporeal.

The collage Death of African art features a wooden base irreverently dotted with cut-up African craft objects, the kind of which one would find in the ubiquitous tourist market place. The composition of different coloured chips spells out the word ‘Yuck’, aimed at an industry that subsists on the mass production of supposedly traditional artefacts.
Explorations of democratic values, an abstract portrayal of wild game hunting, objectification of the female body and word-research into the limitlessness of language reveal Boshoff to be an artist who has mastered a complex visual and verbal language that collides with the elements it uses to communicate. 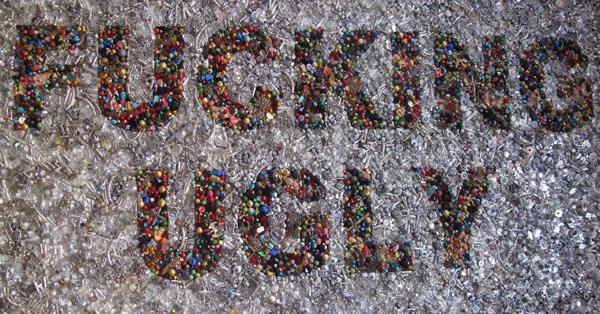