The series, for which Lawrence also composed captions, chronicles Toussaint’s exploits in commanding the slave revolt that led to Haiti’s emancipation from European rule in 1804, thereby establishing the first black republic in the Western Hemisphere. It is the first extended series in which Lawrence tackled heroic stories and themes through a striking style of elemental forms and expressive colors.

Influenced by storytelling techniques derived from film, the Toussaint L’Ouverture series unfolds episodically and kaleidoscopically, presenting scenes at various locations, during various times and from various points of view. Each scene was carefully orchestrated for content; before picking up his brushes, Lawrence spent several weeks poring over biographies of Toussaint’s life, as well as historical and socioeconomic accounts of Haiti.

“Jacob Lawrence was like a screenwriter, in that he emphasized, condensed or omitted narrative details in order to underscore his overriding message,” said Mark Cole, curator of American Paintings and Sculpture. “In his view, Toussaint’s prominent roles in commandeering the Haitian Revolution and drafting the country’s new constitution epitomized the ability of an authoritative individual to bring about major social change.”
Evident throughout the series is Lawrence’s strong acumen in manipulating shapes and colors to communicate with clarity and emotion. Demonstrating his penchant for dynamic yet cohesive patterning, the artist repeated colors and motifs in order to unify the sequence across its individual images. By employing flat shapes without shading and cast shadows, he eliminated extraneous detail. A pronounced sense of graphic design predominates throughout, so when viewed in their totality the 41 images generate a cumulative visual power.
The exhibition is courtesy of the Amistad Research Center, New Orleans, LA. 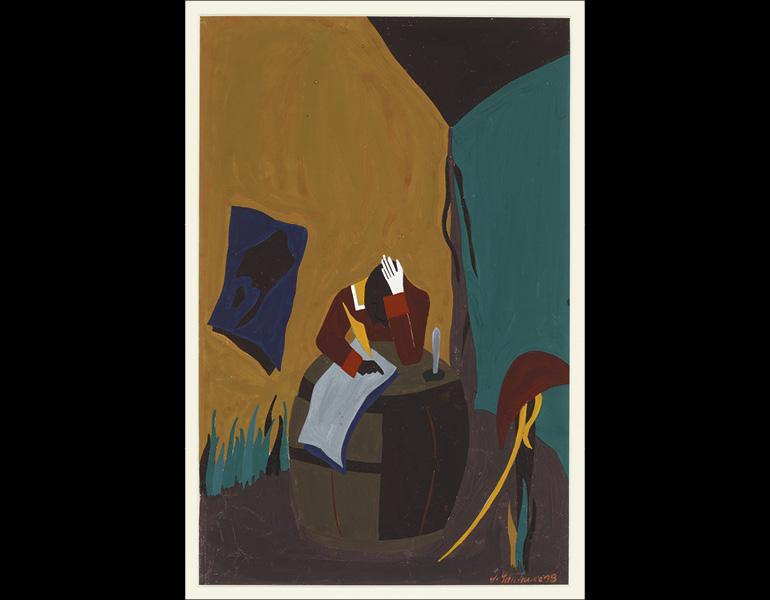 Born in Atlantic City and reared near Philadelphia, the teenaged Lawrence moved to Harlem in 1930. There he received the bulk of his training within the African American community of creative figures who manifested the Harlem Renaissance. He studied at the Harlem Art Workshop and Studio, and at the Harlem Community Art Center, and further honed his skills as a member of the Federal Art Project, a government-funded program established to employ artists during the years of the Great Depression. Influenced by a prevailing aesthetic philosophy of the New Negro movement well under way at the time, the young Lawrence developed the belief that art should embody a quest for both self and communal identity.
While attending lectures and reading books at the 135th Street Harlem branch of the New York Public Library, Lawrence became fascinated with black historical subject matter, which had not been part of his formal educational curriculum. Regarding his motivation for addressing the Haitian Revolution, Lawrence stated in 1940: “I didn’t do it just as an historical thing, but because I believe these things tie up with the Negro today. We don’t have a physical slavery, but an economic slavery. If these people, who were so much worse off than the people today, could conquer their slavery, we certainly can do the same thing.” 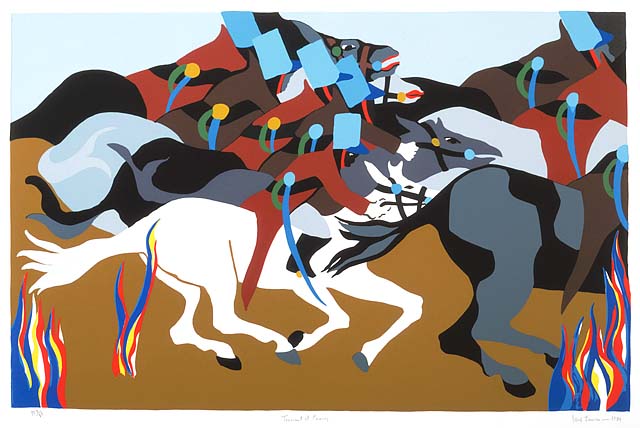 The Toussaint L’Ouverture series launched the artist’s career on a national stage, and its success provided momentum to further elaborate his aesthetic vision. For the next six decades, Lawrence continued to harness the power of abstracted forms to address significant social issues, and a host of gallery and museum exhibitions amplified his fame. At the time of his death at the age of 82, he was among the most distinguished artists in the nation. 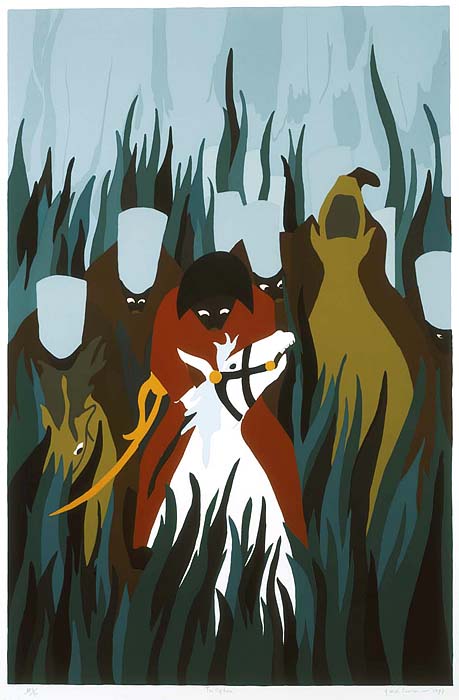