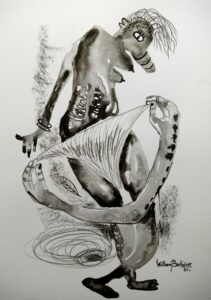 A Bakaïmo makes you at home in the bliss and intimacy of figures that would ordinarily have jarred or repelled. Even when he shows violence, it doesn’t repel or revulse.

The Questions of His Paintings

William Bakaïmo, Cameroonian artist. Born 1990 in Maroua, Cameroon. He received his art training in workshops in Yaounde and obtained a design degree in fine arts in 2017. His paintings compel with their rich visual language, but they throw up a kind of challenge, an endless, self-renewing puzzle, on looking.

The paintings seem to blend mythology and folklore to create a kind of animistic energy. People have the bodies and limbs of animals. The heads have snouts like lizards. The toes and torsos stretch too as if they belonged to lizards. Some of the figures are spotted and have the somewhat filthy look of hyenas. Are they feral? Not quite. That’s what keeps the eye. The animal-like figures, dull palette, and motley composition do not necessarily frighten or repel. In the paintings, an almost jubilant bliss and intimacy can be felt. 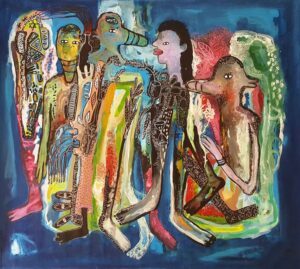 The figures in the paintings feel animate. In Les Amants du Soir, one can almost hear the lovers whispering to each other as they shuffle about in the vines that grow around them. The painting brings to mind Jean-Michel Basquiat’s Horn Players. Besides their stylistic similarities, both paintings seem to work on a canvas divided into three sections, and both allude to music in direct and not-so-direct ways. In Les Amants du Soir, there are leaves, hollow branches, bent foliage. They give an overall feel of susurrations, of wind blowing through vines. Also, the legs that populate the base of the canvas, with their long conspicuous feet, hang down almost like saxophones. To the left of the paintings are bead-like shapes issuing up from a leg. Are they made deliberately to resemble the buttons on a clarinet as well as to signify the painting’s intention to reach for music? And this music, which we very nearly hear, is made more with the bodies in the painting than with the mouths. Is this perhaps what the strong animal imagery in the painting is saying: that, just as with animals, we too make music with our bodies, perhaps our most potent music? 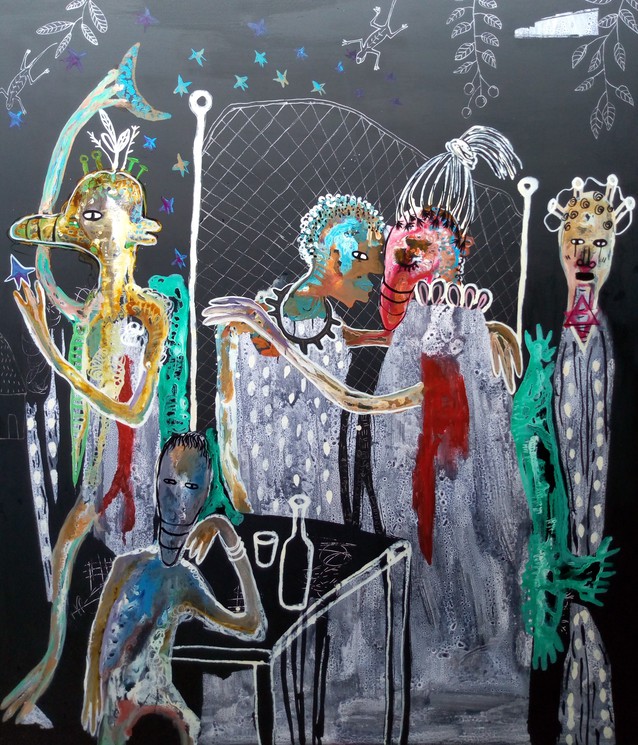 The Wedding Day has a bride turning away in a vivid blush as the groom leans in to kiss her. Her features are not distinct, but her smile is, and the pink of her blush. Where, though, are they getting married? In the foreground, a man is drinking at a table. Could this be a bar? Or looking at the chalk markings and vivid red draped down the bride’s upper arm, might we concede the ceremony is happening in an African shrine? If this is so, why, then, does the bride appear to be wearing a white dress, as in a Christian wedding? Is this a blend between African religious systems and the Western? It is hard to say. What isn’t, though, is that, for everything the painting is, joy is present. 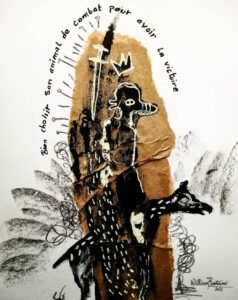 Bien Choisir Son Animal de Combat pour Avoir La Victoire has at the centre of the painting a lizard-headed creature with prominent eyes and parted lips behind the head (or cap strings hanging behind the head?) A crown hovers just above his head, and slightly toward the left, a sword. A crown and victory. A dog fills the bottom of the painting. It looks eager, for battle, for blood. The well-chosen animal of war. What are the chalk-like markings going through the dog’s body and coming down in a spray from the pointed end of the sword? Has an animal, a person been slaughtered? What are the blurry daubs around the brown as of waves parting? Are they in a boat? Are those squiggles eddies? Should one perhaps think of the Argonauts? That the victory quest of the man and his dog is shadowed by a hovering peril? 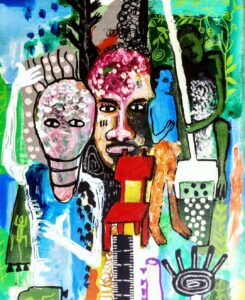 Two piercing eyes gaze at us from the painting L’enchanteur (2020). The painting is an arresting work of intense colours. As ever, even though not as directly as in the other paintings, the mystic and animistic are present, an undercurrent animating the canvas. Four figures are painted, all of whom appear male. The figure in the foreground makes signs in the air. He appears to be conducting a musical orchestra, but he is not—he is the enchanter (interesting to think that the word l’enchanteur (the enchanter) stems from the Latin in cantare: to sing). Behind him, in the middle ground, is a man with an intense gaze, and in the background, two men who seem to be preparing their magic. The two piercing eyes belong to the men in the fore and middle ground. Their gaze is not so frightening as striking. They are focused and sure, intense. Why are their gazes so intense, though? Is it to leave you in no doubt that they can and would enchant you? Is it to say that the eyes—perhaps even more than the voice— are the most potent means of enchantment? Or is it to have us know that the painting (perhaps all paintings), as we look at it, looks at us as well?

These questions leave an elusive quality to the paintings and serve as points of departure.

How the figures are rendered in the paintings, their interactions, and suggestions, makes one think actively of myths and fables—the Argonauts and their quest for the golden fleece, the possession of human traits by animals in African folklore, the possession of animal spirits by humans in tribal mythologies. How do these stories and worldviews shape our understanding of self? To what extent can their validity guide us in apprehending personal and societal representations?

In invoking myths, or more precisely, mythical language, Bakaïmo’s paintings do what myths do—they mirror us in a non-literal way. They show us who we are and how we are by showing us what we are.

His paintings show similarities: in style, to Jean-Michel Basquiat; in composition, to Kudzanai Chiurai. But the charge of his work is different. A Basquiat rails and shocks; A Chiurai confronts intensely with socio-political reality. A Bakaïmo makes you at home in the bliss and intimacy of figures that would ordinarily have jarred or repelled. Even when he shows violence, it doesn’t repel or revulse. Rather it inspires curiosity, questions about whether we are present in these animals or these animals are present in us, or if there is a valid relationship between u s and the animistic world of the paintings, and if there is, what is it? The questions are the point.

Joseph Omoh Ndukwu is a writer and editor living in Lagos, Nigeria.