Stephens and Kentridge have been working together on tapestries for the past 24 years. About 40 tapestries have emerged from this longstanding collaboration between the two studios, in which Stephens translates and upscales the artist’s collage drawings for the very different materials and techniques of tapestry-making. The collaged drawings often use different and difficult images and materials as a challenge to the weaving studio. 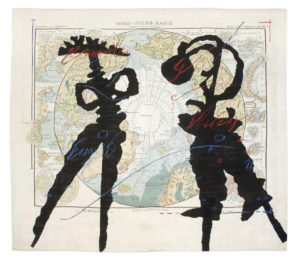 Tapestry weaving is both an ancient and a modern technology. It was practiced in the great Flemish and French tapestry workshops of the 15th and 16th Century. But there is a contemporary sensibility in the transformation of an image into a series of pixilated decisions: the 2000 threads of the warp, the many thousands of thread of the weft.

The coherent final image is the result of many specific decisions. A tapestry also relates in scale to a mural. But these are removable murals, and in this way relate to projections too. So the artist thinks of these sometimes as fixing the frames of a projection in the taut strings of the weaving.

Each tapestry is made by five or six weavers sitting in a row along the loom. The challenges presented by Kentridge’s designs have boosted the development of the skills of the weavers over the years.

Dedicated exhibitions of tapestries created by Kentridge and Stephens have been shown in Philadelphia, Spain, and Capodimonte. 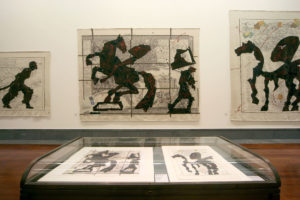 No South African artist has achieved greater status than William Kentridge. His career has brought him international recognition at a comparatively early age as one of the major living artists. This reputation is confirmed by the stature of the institutions and art museums that have exhibited his work. In the past five years he has had solo exhibitions at the most prestigious centres of contemporary art. These include the Museum of Modern Art (MOMA) in New York, the Museum of Contemporary Art in Barcelona, the Chicago Art Institute and the Tate Modern in London. 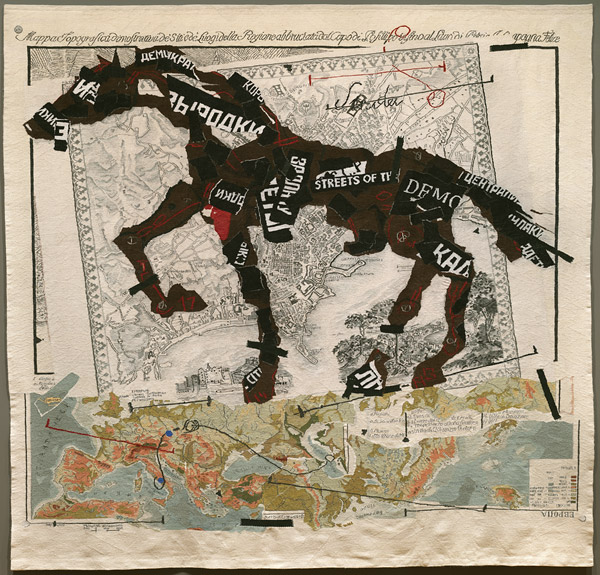 Kentridge was an exceptional undergraduate at Wits. He did not confine himself to one area of specialization but took a general BA degree. He later went to the Ecole Jaques in Paris, where he was trained in contemporary performance art. In the past two decades he has combined the skills he learnt there with a sustained investigation of animation techniques and has evolved a distinctive and unique art form that he describes as ‘Drawing for Projection’. His combination of contemporary video technology with traditional drawing skills reminiscent of those of the German Expressionist movement has fascinated audiences throughout the world. Much of his work deals with socio-political conditions in South Africa and the human dilemmas of passion, greed, pain, and injustice. His creative intelligence is remarkable and, as he works within the Post-Modernist era, the spread of his talent and ease with which he uses the great modernists is appropriate for his time.

Kentridge has command of two great creative disciplines: theatre and the visual arts. Few individuals have been able so seamlessly to bridge the gap between one art form and another. In the past ten years his theatrical productions have been showcased at Documenta in Kassel, at the Lincoln Centre in New York and at the Pompidou in Paris and have travelled to some thirty cities internationally. In the coming year he will be working on a significant new production of The Magic Flute, commissioned by the LaMonnaie/ Da Munt Opera in Brussels, one of the great opera houses of Europe.

*
Scholarly writings on his work have been published in almost all the major art journals in Europe and in the United States and a number of books have been written about him, including a monograph published by Phaidon, one of the most prestigious and influential of contemporary art publishers. Few South Africans are fully aware of Kentridge’s stature within the international arts community. He has, in the past year, won the Carnegie Medal (other winners include Picasso and Jackson Pollack) as well as the Goslar Kaiserring, one of the most prestigious awards in the European art world, previously awarded to Max Ernst, Joseph Beuys, Willem de Kooning and Henry Moore. He has been awarded an honorary doctorate from the University of Maryland.

It is unique for a South African artist to have achieved such international success while remaining in South Africa, a country that is not known for its enthusiastic support of the arts, but William Kentridge has succeeded, emerging as an artist of remarkable global stature and significance while retaining a strong regional commitment.
It is with great pride and pleasure that the University confers on William Kentridge the degree of Doctor of Literature honoris causa.(texts Wits Art Museum)