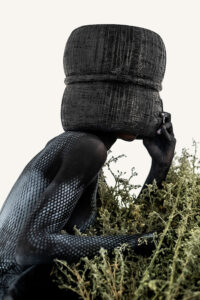 Zana ‘Ndebele Superhero’ Masombuka is a young Johannesburg-based conceptual artist who draws inspiration from her upbringing in rural KwaNdebele, in a small town called Siyabuswa. She is an International Studies graduate from Stellenbosch University, where she learnt the art of critical thinking, as well as the importance of globalization and how it continues to impact the African continent.

Her art speaks to African’s active role in the next wave of this global phenomena and how African artists aim to pioneer the stories being written about their continent and its people, which is fundamental to the preservation of their heritage. In “The Re-Invention of Africa: Edward Said, V.Y Mudimbe and Beyond,” Mazrui states that Africans need to interpret their history themselves and seek to re-invent Africa in their own terms. Therefore, “Ndebele Superhero” is a platform that has allowed Zana Masombuka to speak of the stories of the past, present and the re-imagination of the future of her people. 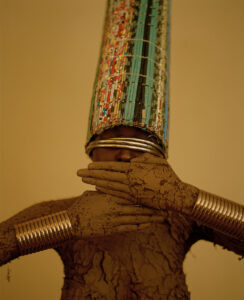 Zana believes that the better half of this century values the importance of representation and for people to tell their own stories. Hence, her work aims to highlight the evolutionary process of culture, particularly the Ndebele culture, and how it emulates human behavioral patterns as well the various environments that influence its formulation. She argues that, due to the fact that the world remakes itself every 100 years or so, it is pivotal for Africans to be aware of this fact and discover ways they can steer the tide in their favor, which will result in the overall uplifting of the people on the continent. Furthermore, every century has collectively belonged to a continent, dating back to the golden era in Asia, when gunpowder was discovered, and the undocumented times before then. Therefore, there is no better time than now for Africa. 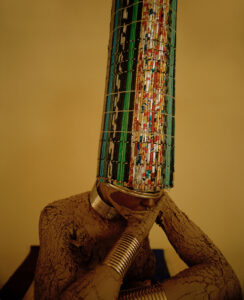 The overarching theme of her work explores the convergence of the human experience with the modern world and how that impacts culture and tradition, especially in Africa. She does this by engaging with themes such as identity, time, conflict and adversity, capitalism, and the conversion of man and technology. She takes it further by exploring the inner world that exists within all of us, better known as our intuition, and challenges her audience to look within themselves for the road to who they really are. She argues that human beings do not only consist of the physical, but that we are metaphysical beings too; and that looking at humans holistically helps us better understand our experience. Within this context, Masombuka strongly believes that the liberation of Africans depends in the recognition of this very inner world.

The aesthetic of Zana Masombuka’s work is inspired by the emotive and vibrancy of the Ndebele people as well as the Ndebele culture. It is deeply rooted in the recreation of the African identity, with a focus on the Ndebele culture, and how Africans from all industries are paving the way for themselves as well as future generations. With this said, she reinforces the importance of art historically and how it formulates as part of the building blocks of any society. Ultimately, the work of Zana ‘Ndebele Superhero’ Masombuka is the culmination of two parallel worlds, the West and Africa, indigenous cultures and modernity, as well as the outside world and the internal world of the individual. 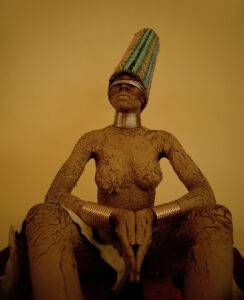 Alongside her creative practice, Masombuka co-operates a community accessible herbal garden with her sister located in the Maboneng arts district in Johannesburg.