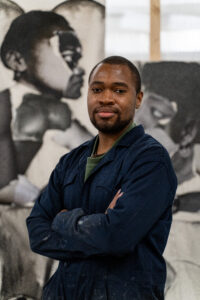 At the beginning of 2021, the tenth ABN AMRO Art Prize was awarded to Neo Matloga. As part of the prize, his exhibition along came your eyes opened on 17 May 2022 in the Hermitage in Amsterdam. With a series of seven new works, the South African artist is taking the next step in his artistic process.

Thank you for having me. My name is Charl Landvreugd, Surinamese born, Dutch artist, curator and researcher looking at the politics of cultural belonging in an European context. 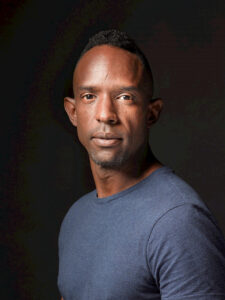 I am honored to speak on Neo Matloga’s work today here before you. In today’s climate, and with the recent research outcomes around this bank’s colonial past Neo’s work is a timely response. A response in which his work provides an image of Blackness which is reflected in itself rather than in the gaze of whiteness.

Let us therefore, in Neo’s words, thank God and the gods that Neo came to the world years before his namesake came to us in The Matrix ca. 1999.

In the movie The Matrix, Neo is liberated form the computer simulation in which all of humanity lives. His liberation means coming into the analog world where he discovers that the humans serve as batteries to machines that have taken over the world. Naturally and reluctantly, within the context of the white knight syndrome, this specific version of Neo does everything that is in his power to liberate the humans. But, of course the humans do not want to be liberated as they quite enjoy the life they know. In his efforts to liberate our minds from The Matrix, the movie version of Neo goes back into The Matrix only to discover that he masters mind and matter in that universe.

The worldwide identification of our capitalist Matrix, spurs artists, thinkers and activists to see how a different matrix can be formed. Our real-life Neo, this Neo, Neo Matloga is actively partaking in this process of re-shaping a world away from this capitalist space where Afro-pessimism rules. In Azu’s Nwabogu’s words: Afro-pessimism is ‘the ease and acceptance with which Black pain is shared in mainstream media and visual culture’. 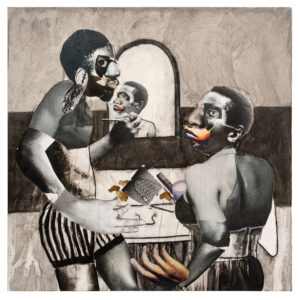 Moving away from this takes great effort, and doing it so effortlessly takes great skill. It is an aesthetic of the Cool to see the faces of many family members coming together, possibly forming an ancestral image. A future of an ancestral image. Just like Romare Bearden did when meeting Kerry James Marshall. Just like Lieutenant Uhura did when meeting Beyoncé in the vicinity of our children, blakerdieblackblack conflation of past present and future. The everydayness of Blackness that is known around the globe as cool. The everydayness of Blackness that is not recognized in the everyday of the everyday majority group media in the Netherlands and minority hegemony worldwide.

As Toni Morison declares in Beloved …‘Someday you be walking down the road and you hear something or see something going on … And you think it’s you thinking it up … But no. It’s when you bump into a memory that belongs to somebody else “ (Beloved, p.45)

With Western eyes I quote liberally from the Jury rapport –  We see a truly new voice that, at the same time, has a certain familiarity. The day-to-day household coziness of his youth: friends at the kitchen table, conversations on the sofa, dancing in the living room; upbeat stories full of affection and a sense of security, inhabited only by people of color.  The people of color that are family, friends and famous South Africans are granted many facets and perspectives, both literally and figuratively. Eyes and ears go in all directions, and limbs are contorted; the figures seem both endearing and disturbing. As such, his work can be regarded as an invitation to look at a Black community, while our gaze is cast back by eyes that seem to miss nothing. The collaged subjects are Spirit-like entities that remind us of what we don’t see: (and apparently that is) the problems that South Africa continues to face. The work has an idiosyncratic signature style that subtly links household scenes from his home country with the difficult socio-political background against which they take place. And questions are being raised about apartheid, racism and Black identity. 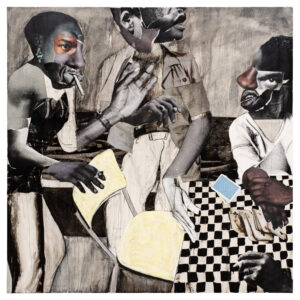 With my eyes I see scenes that I have seen many times before. Scenes that I have lived through. Scenes that you have lived through. People relaxing, chilling, sitting, flirting, living, playing cards at the kitchen table, exuberant laughing while something is being cooked on a stove. Or maybe a chicken is being roasted in the oven. The safe haven of home and family life, the warmth, the strength, while listening to and imagining being the lovechild of Miriam Makeba and Harry Belafonte. The fun that can be had when going out with your friends, those that look like you so self-evidently that you bathe in the feeling of belonging while navigating public space. Learning to swim. Going from high definition to a grainy view when particular features are highlighted in your consciousness due to your own awareness and or the gaze of others. Racial profiling. With my eyes I see fragmented realities of family members existing and living on different continents. Flowing in and out of existence, here, not here. Flowing in and out of time, yesterday, tomorrow and always here, all at the same time. As an artist and curator Neo’s work is part of a politics of self-evident Black omnipresence.

With Afro-Caribbean Black Diaspora eyes the different spiritual energies become apparent. The energies that live within us are presented to earthly eyes. Paraphrasing Azu Nwabogu’s essay in the book…. ‘androgynous elements that could be seen as universal to sexual identity’. This knowledge about the presence of all energies that has not been lost under the brutal force of colonization and its civilizing missions is a testimony to the power that lies within us to actually change the matrix through our art and our being. Self-evident blakerdieblackblackblack Joy that is pouring out of all of these artworks. Not for our entertainment but rather as mirrors to the Black Diaspora self. Mirrors beyond the African Diaspora. Mirrors to the world. 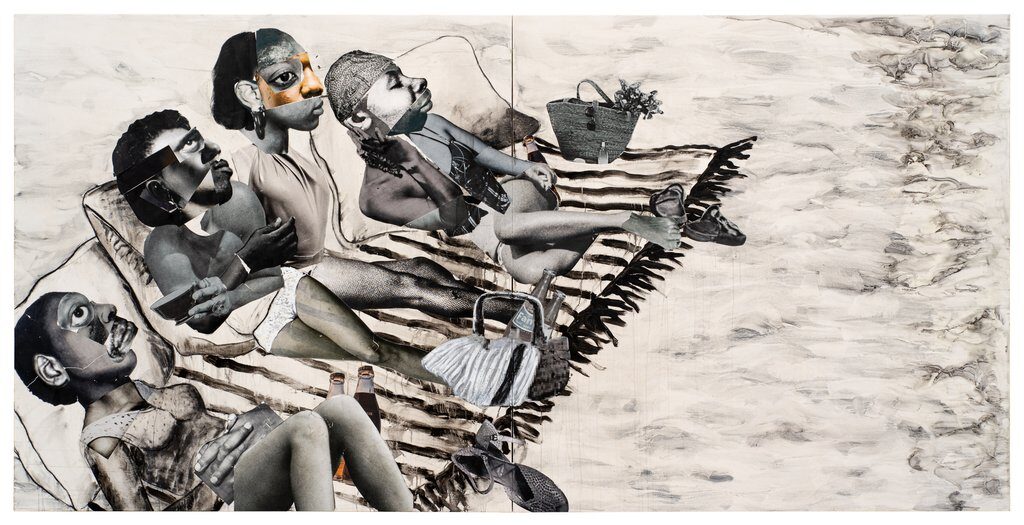 In closing I would like to congratulate the ABN-AMRO with this tenth edition of the Kunstprijs and their choice for Neo Matloga. It would be great to see your commitment to being part of the matrix change prolonged. This is a system change that is demanded by a new generation of world citizens that are craving for different mirrors in which they can reflect their image. Art is one of the ways in which these mirrors can be presented and the work by Neo Matloga is a prime example of that.

Toi Neo,… Congratulations,…. Sorry that we have not met today but look forward to seeing you in real life.. Self – evident Black Boy. It is in your company that I get to know myself.

along came your eyes, Hermitage Amsterdam, until October 2, 2022