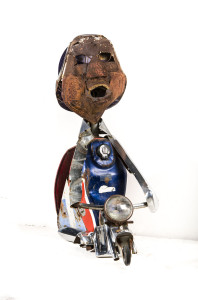 The kind of material with which he works is not found in art shops or even do-it-yourself stores and builders’ merchants, but in scrapyards and on beaches. In less enlightened times it was common in Curacao to dump household rubbish in the sea, and what doesn’t decompose gets washed up somewhere else eventually.
Chris Morvan portrays the artist Yubi Kirindongo from Curacao.

“I don’t fight the material. If you fight it, it can become difficult and it never ends.”

Life for an artist in a small, relatively remote place is never easy in terms of the practicalities of getting their work seen, known and therefore bought, but Yubi Kirindongo has made a success of it in Curacao, a small Caribbean island off the coast of Venezuela. He has made such and impression, in fact, that they have named a roundabout after him.
Having a piece of road hardware named in your honor might seem a curious sort of tribute, but when you look at Kirindongo’s work, it is very appropriate. His is an industrial style artist. Where others see junk and scrap metal, he sees raw materials.
When I meet Kirindongo it is in the Surinamese capital, Paramaribo, where he is spending a month as the figurehead of a program aimed at unleashing the artistic talent in young people whose lives are either drifting aimlessly or have already taken a bad turning. Identity, independence and respect: that is the motto of an initiative to ‘resocialize’ young dropouts and help them to rebuild their lives in a more constructive way. Young prisoners and single mothers are among the target groups.
The venue for the interview is the very salubrious Wyndham Garden hotel, where the project organizers have housed him for the duration, but there is little lounging by the pool involved. This is not a jolly, its work, and the beneficiaries of the program live in anything but luxury. 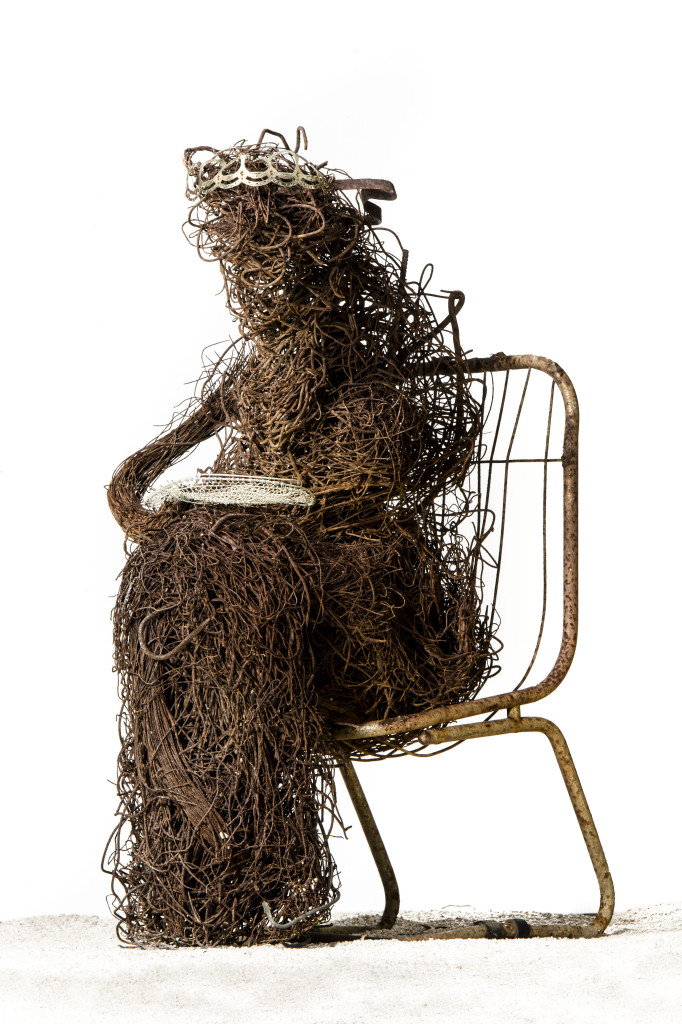 Several days are spent at Santo Boma, a prison built on the site of an old farm on the outskirts of Paramaribo. With his rugged appearance and deep, cigar-ravaged voice, Kirindongo is unobtrusive as he roams the outbuildings in which the prisoners taking part are in the midst of creating things out of the carcasses of old cars.
The building where the work is taking place is littered with stacks of wood, barrels, half a bicycle, a tractor, an old office chair and three dead refrigerators. The group working on the shell of a Toyota Corona Exiv have already taken the headrests from the seats and welded them to the roof, like ears. A computer keyboard is attached to the dashboard. On the wings are fixed thin steel arches. 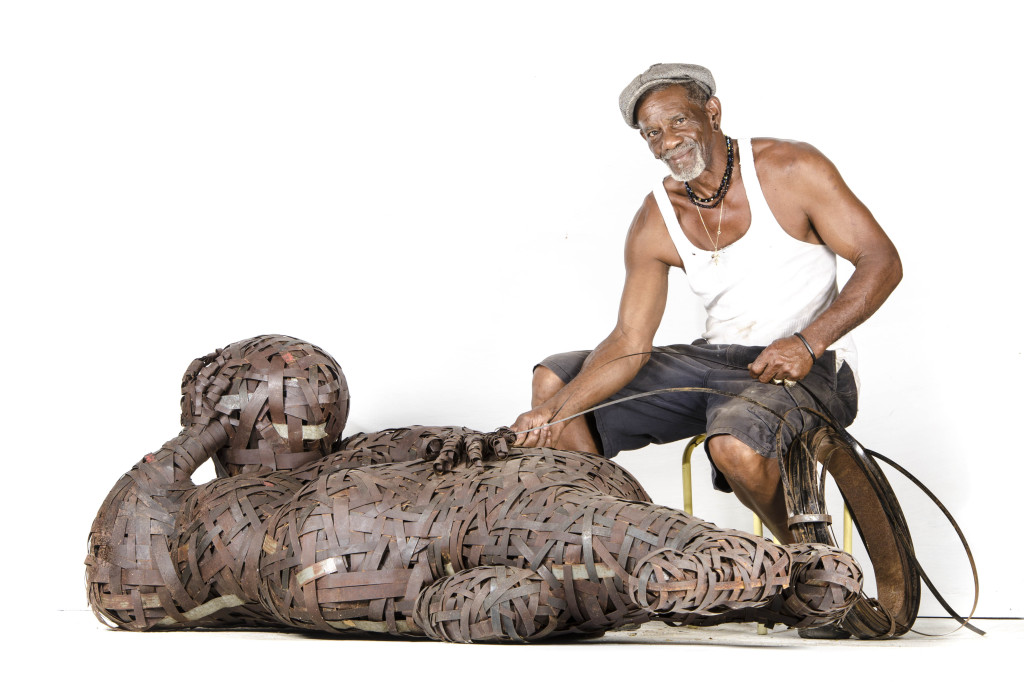 Inmate artists wander around, electric grinders and jump leads in hand, weighing it up. An hour later it has acquired gas canisters fitted on the rear wings like rockets.
Meanwhile, outside, the carcass of an Isuzu minibus has been kitted out with a big, boxy television set. The artists on this one have started the paint job early, with red graffiti-like markings on the back.
Both vehicles end up with bars and grids on windows which seem like a reminder of their circumstances, consciously or otherwise.
“It’s the freedom of art,” says Kirindongo, in a perhaps ironic choice of phrase.
Kirindongo is accompanied by his wife Charlotte, a disarmingly charming character who seems to be a pragmatic influence, contributing greatly to harnessing the artist’s creative energy and ensuring that his professional life is not just a series of works of art but a career. Charlotte is also comfortable in these surroundings, having begun her working life as a social worker and now spending much of her time running programs in prisons in Holland.
Kirindongo has exhibited in many European countries including France, Germany and Belgium (and of course, given the island’s Dutch heritage, the Netherlands) and also as far afield as China and the USA. 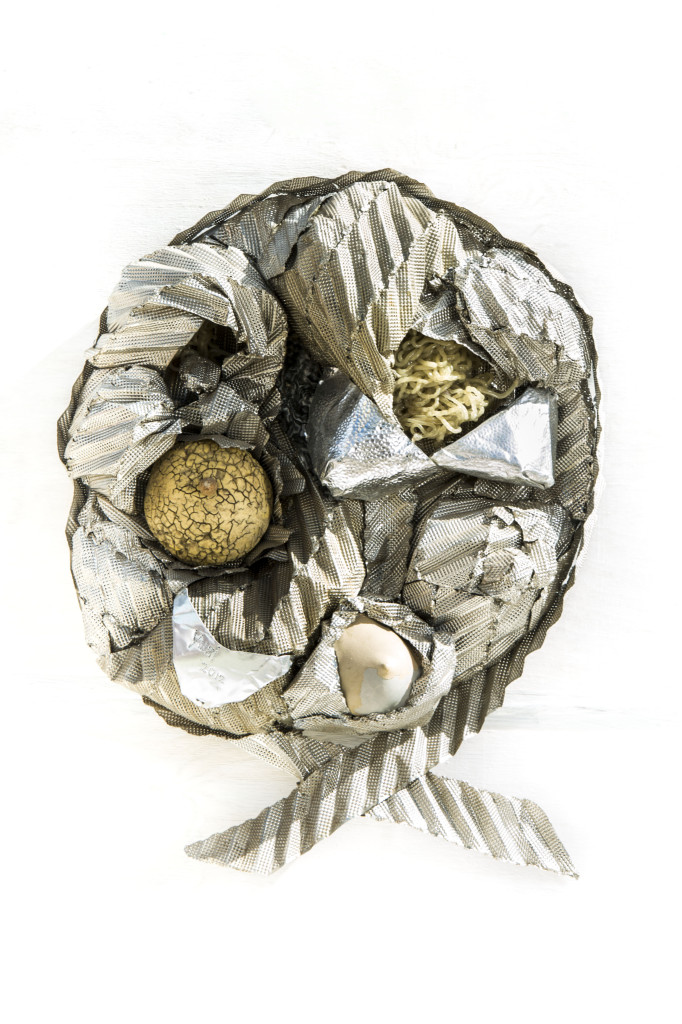 A troubled and troublesome young many years ago, Kirindongo connects with those who are taking part in the program because, it seems, they see something of themselves in him. This is not the stereotypical artist with a palette and a paintbrush. He’s a reformed bad boy who went from the edge of oblivion to international success and who even now, well into his sixties, still looks like he could be their uncle, the family maverick with his earrings and generally rough-hewn appearance.
Born and raised in Curacao to a mother who worked long hours as a hotel chambermaid, and with an absent father and no prospects in his home island, Kirindongo decided at the age of 19 that he wanted to go to Europe and make something of himself, so he stowed away on a ship and found himself in Greece.
“The way out of poverty and unemployment was to take the chance to be a sailor.” 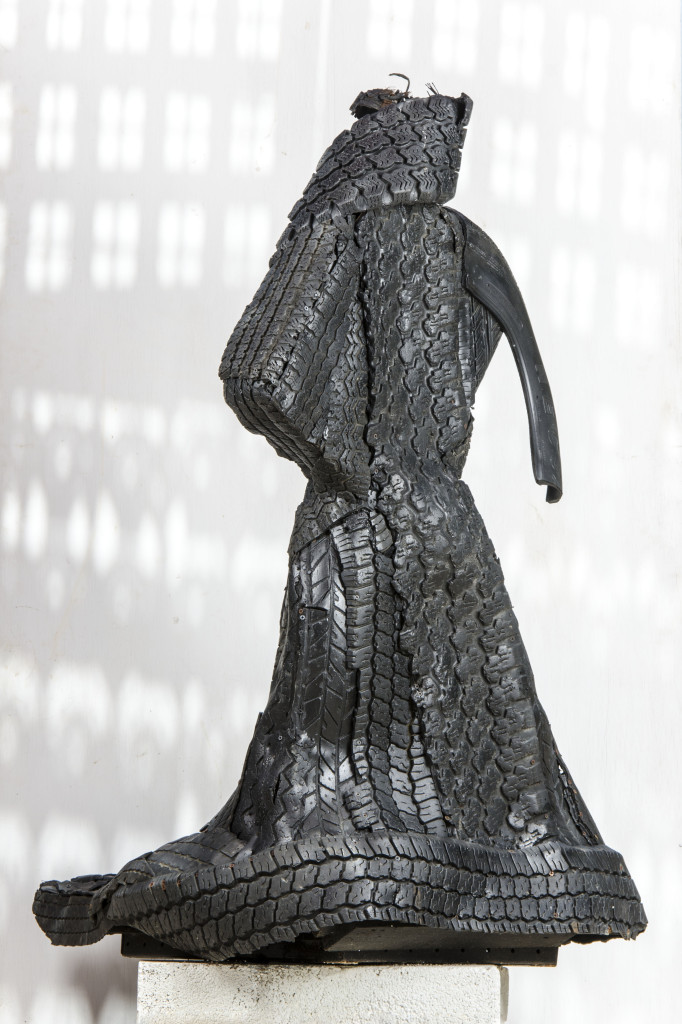 With little parental supervision, Kirindongo didn’t bother much with education.
“The only day I went to school was Friday,” he says. “Because on Fridays we had drawing, and I was good at that.”
Having landed on the other side of the Atlantic, Kirindongo moved around, “living from day to day”. He had an aggressive streak that got him into trouble but also helped to earn him a living, working as a boxer in a travelling circus.
Out of the ring, though, he was using his fists and a knife and spending a night, two days or a week in prison, but when he graduated to a gun in Den Haag, Holland, he found himself doing nine months. This gave him time to reflect on his life and the fact that what felt good was doing his drawing and the pleasure other people got from his talent.
Kirindongo also took advantage of the prison library, where he read a book for the first time. It was about Caravaggio, himself a man with a history of violence and, just as the young prisoners do through him in Paramaribo, Kirindongo saw how art could be applicable to someone like him, and not exclusively for those from a more fortunate background.
Having progressed from drawing to painting, he returned to Curacao after 11 years, and found that everyone was still painting, so he decided to do something different. 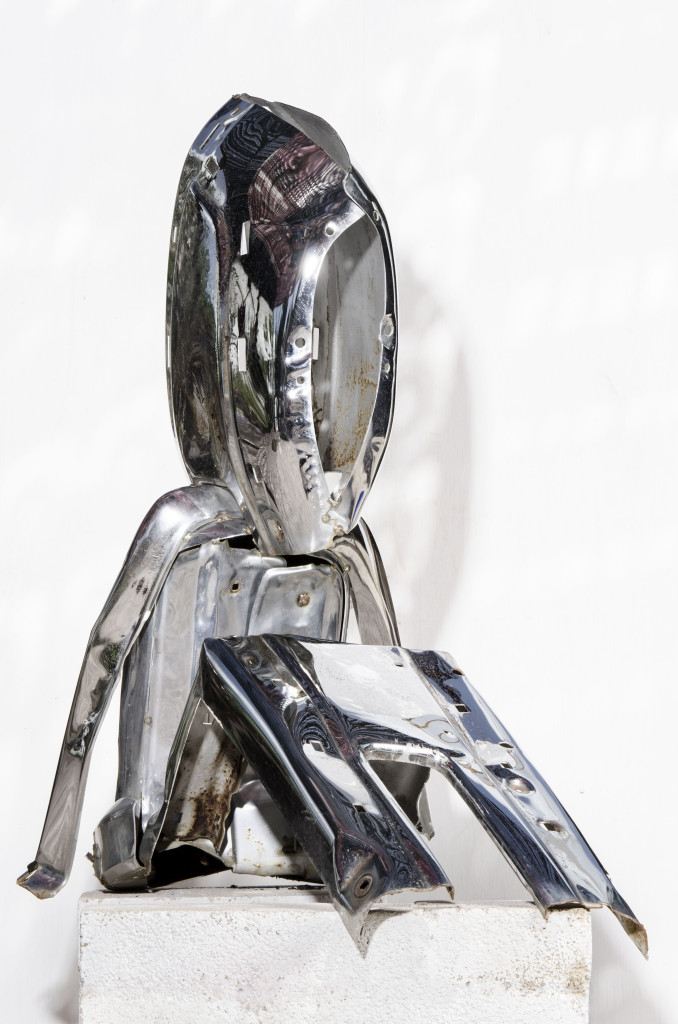 “I had always been good at woodcraft,” he says. “And I always had something in my hands, some wire or something, which I would make things out of. I could make a human figure out of a matchstick. So I became a sculptor. I could do it with wood, or stone or clay – and it worked. My first exhibition was made with car bumpers, and by accident I discovered the material that has made me well known.”
He had come across the bumpers, which were destined for the landfill site, and liked the shape they made when lying on top of each other.
“The form leads me or I let the material lead me,” he says. “I don’t fight the material. If you fight it, it can become difficult and it never ends.”
The kind of material with which he works is not found in art shops or even do-it-yourself stores and builders’ merchants, but in scrapyards and on beaches. In less enlightened times it was common in Curacao to dump household rubbish in the sea, and what doesn’t decompose gets washed up somewhere else eventually. 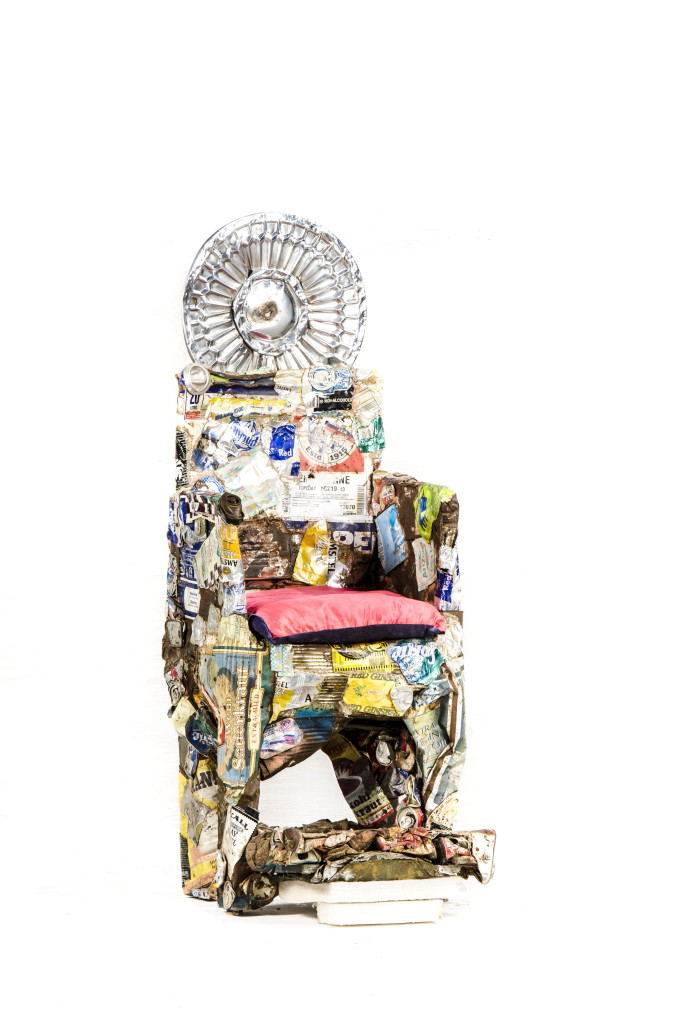 So, art and a small island are a good combination for Kirindongo, but what of the rest of Curacao’s artists?
“For me, I can’t complain at all,” he agrees. “I am respected there. There are probably a hundred or so artists there. I am fortunate enough to be the most successful. Most of them are from outside the island. Most of the ones born in Curacao are now living in Holland because they can make a better living there.”
One of the imports is Philippe Zanolino, who has enjoyed success both within the island and abroad, and whose son Giovani is now emerging as an artist in his own right.
Most of the artists in Curacao, though, are women, Kirindongo says.
“Maybe 90% are women, and most are Dutch. There are also some from Suriname and from France.”
He mentions by name a woman called Jean Girigori, who has Curacao blood but grew up in the Dominican Republic before making the island her home.
There are, Kirindongo says, “three or four galleries,” but the number is gradually dwindling.
“It’s hard to stay alive selling only art,” he concludes.
Confusion is the word he uses to talk about the current state of the art world, particularly since the ‘installation’ became popular.
“Now everything is an installation,” he says, gesturing at the furniture in the hotel bar. “This table is an installation. There is a philosophy that everything is art, and if everything is art, you can get away with it if you have a network with a say in this field; you’re in.” 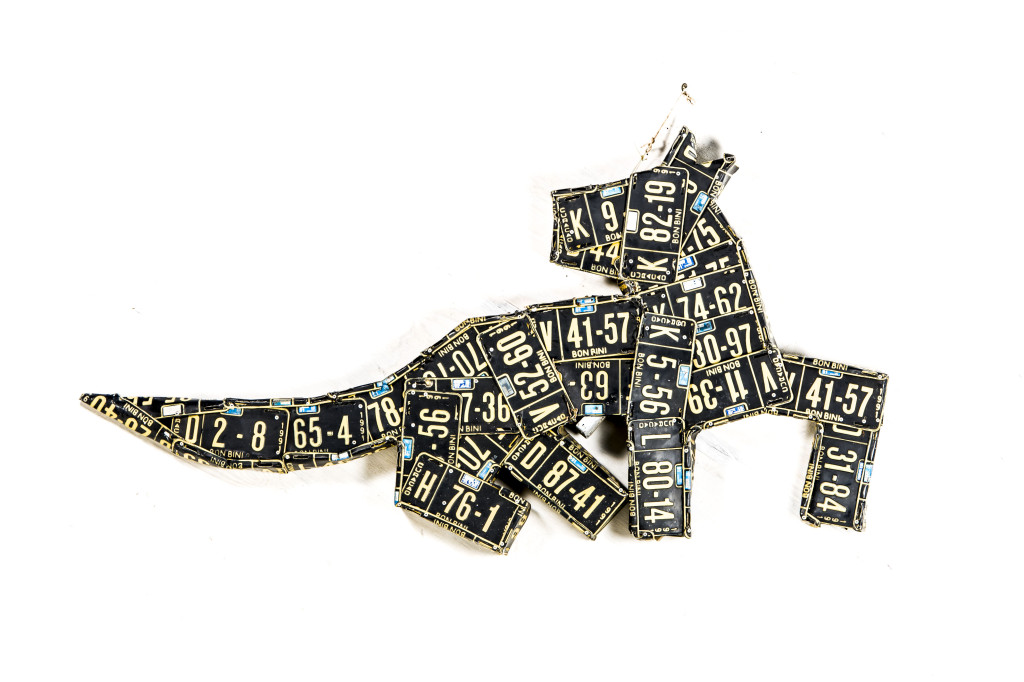 Yubi and Charlotte are quietly proud of the fact that the Queen of the Netherlands is enough of an admirer that when she visited Curacao she sought them out and went to their home. They had been due to meet at an exhibition in Amsterdam but for various reasons Kirindongo wasn’t standing with his work when she came by to discuss it.
Finally meeting up at the Kirindongo gallery/museum/workshop was, he feels, a better idea anyway.
“Where better to talk about my work than in the place where it is made?”
For those not fortunate enough to be visiting Curacao, Kiindongo’s website is http://www.yubikirindongo.net/

Chris Morvan is freelance writer/editor, musician and teacher. He lives and works in Paramaribo, Suriname.