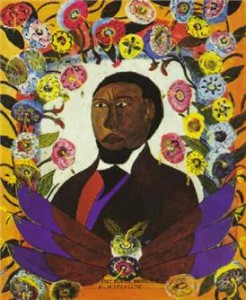 Hector Hyppolite is widely considered to be one of the best artists that Haiti has produced. Discovered by American painter and teacher Dewitt Peters based on the quality of the drawings that an untrained Hyppolite had made on a wall the in 1940’s, Hyppolite’s art came to be written about by surrealist writer and critic Andre Breton. 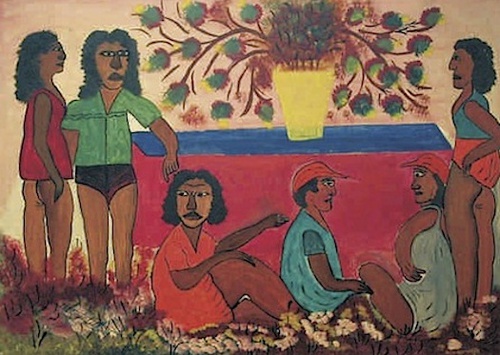 Hector Hyppolite was not only a painter; he was also a Houngan, or a Vodou priest. He painted many vodou scenes, choosing spirits as his subjects. The Houngan has a place in Haiti that no one else has: he is often visited and confided to by politicians to help that politician win the favor of a Vodou spirit, especially in dire times. The Houngan is aware of what this politician must do for this spirit and what happens if this politician does not do what the spirit asks for. 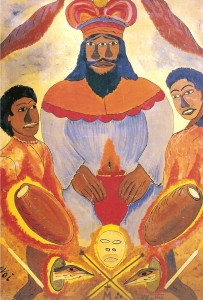 Hector Hyppolite’s being both a Houngan and painter has produced an invaluable painting: that of President Florvil Hyppolite, who died in 1896, before Hector Hyppolite started to paint. Almost every single Haitian can sing along to Panama’m Tombe, a song made out of the fact that Florvil Hyppolite died of a heart attack on a horse on route to put down a rebellion, his Panama hat falling to the ground. Hyppolite came to power as a General through a revolution and ruled as a strong man. In Haitian Vodou, there is now an Ogou Panama, Haitian Vodou Ogous being descendants of the West African Ogo, patrons of iron, war, and of soldiers. This Ogou was born out of the observation that Hyppolite abused his power and was killed because of his abuse (in Vodou terms he served Ogou and because of his abuse of his power was possessed by this Ogou until death.) In other words, the Ogou Panama is, according to Vodou, the Ogou that is responsible for Hyppolite’s death. 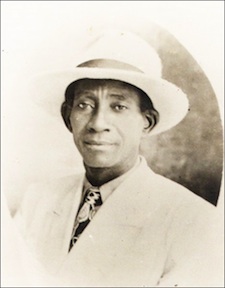 In his painting, Hector Hyppolite decorates his portrait of Florvil Hyppolite with flowers, each colorful and beautiful, signs of prosperity. Hyppolite is stern faced and dressed presidentially. Hyppolite’s eyes, however, seem concerned. He seems to feel that something is wrong, despite being powerful. Hector Hyppolite paints us a story that has become a folktale, a myth, without much detail, telling the entirety of the Hyppolite tale in the contrast between Hyppolite’s eyes and the remainder of the painting. As a houngan, Hyppolite had access to civil and political society like no other and he, more than anyone, could know what the concern of a business person or political personage in need of a favor from a Vodou spirit through a Houngan looks like. Perhaps it is this knowledge that informs this painting, esoteric at its essence because few people in this world are given access to human beings like a Houngan. 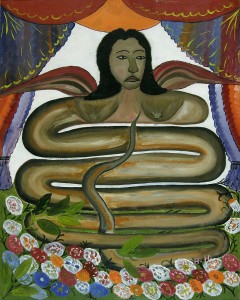 Text: Adolf N. Alzuphar, a critic, raised in Haiti, living in the US.