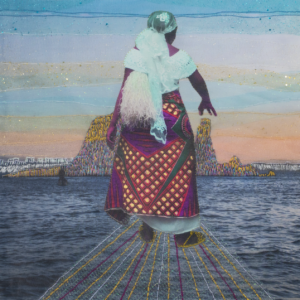 About:
Joana Choumali, born in 1974, is visual artist/photographer based in Abidjan, Côte d’Ivoire. She studied graphic arts in Casablanca (Morocco) and worked as an art director in an advertising agency before embarking on her photography career. She works mainly on conceptual portraits, mixed media and documentary photography. Much of her work focuses on Africa, and what she, as an African, learns about the innumerable cultures around her.
In her latest works, Joana embroiders directly on the images completing the act of creating the photograph image with a slow and meditative gesture. Joana has exhibited her work at the Museum of Civilizations-Abidjan, the Donwahi Foundation for Contemporary Art-Abidjan, at the Rotonde des Arts Contemporary Art Center – Abidjan, at the Vitra Design Museum-Basel, at the Museum of African Contemporary Art Al Maaden- Marrakech, at the Museum of photography -St Louis, Senegal, at the Tropen Musuem –Amsterdam at the International Photography Biennale of Bamako, at the Photoquai Biennale (Quai Branly Museum- Paris), at the Lagos Photo Festival, and PhotoVogue festival. In 2014, she won the CapPrize Award and the 2014 Emerging Photographer LensCulture Award. In 2016, she received the Magnum Emergency Grant Foundation, and the Fourthwall Books Award in South Africa. In 2017, she exhibited her series “Translation” and “Adorn” at the Pavilion of the Ivory Coast during the 57th Venice International Biennale. Her latest mixed media series Alba’hian is exhibited at the Zeitz Mocaa Museum of Contemporary Arts-Capetown.
Her work has been published in the international press: CNN, New York Times, Washington Post, El Pais (Spain), Le Monde, The Guardian, The Huffington Post, Harper Bazaar Art, Le Temps (Switzerland), La Stampa, The Internazionale (Italy) etc.
Her book “HAABRE”, was published and edited in Johannesburg in 2016. 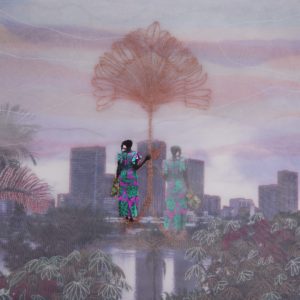 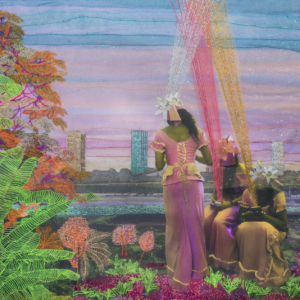 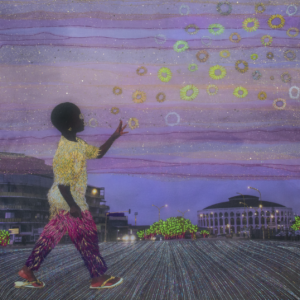 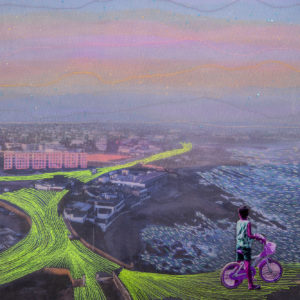 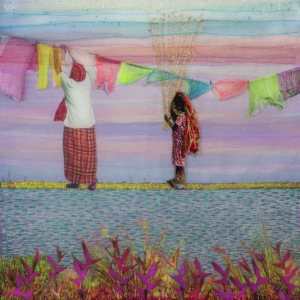 Alba’hian Project
Alba’hian in Agni language ( fron Akan group in Côte d’Ivoire), means the first light of the day, the dawn.
Since more than a year now, every morning Joana wakes up at 5 and walks for long stretch of times. She begins each new day by getting in contact with the land around her, observing the landscapes, the shapes of buildings or the objects slowly revealing themselves, the streets and its people awakening, starting a new day at the sound of joyful and noisy birds.
What started as a physical training for a trekking in Asia, gradually became a daily routine, a ritual of introspection, that accompanies her ever since, even when she travels in other countries, especially in Africa.
As the morning light at the beginning of each new day, slowly makes every detail of the material world visible, so this practice of observation has made Joana become aware of the shift in her thoughts and her perception of realities.
She witnesses the energy of the continent which keeps its people going and shape their lives, and the changes in herself.
She has taken the habit of taking pictures of the landscapes that amaze her every morning, rigorously between 5 and 7 a.m. Afterward, using a mixed technique of collage, embroidery, quilting and photomontage, she superimposes on them several layers of ethereal fabrics intertwined with other images she takes during those walks, like silhouettes of passers-by’s, street photographs or stills.
The result is the delicate and dreamy toiles which evoke the invisible meanings and revelations of the artist’s morning experiences. The separation and at the same time the relationship between the real world and the world of imagination.
We could say that Joana’s work is made of the same substance memories and dreams are made of: impalpable and barely perceptible images that overlap one another, mixed with ancient suggestions and recent sensations.
It is now the heritage of cognitive science that the mechanisms of our memory operate through a stratified system of different levels of awareness and consciousness: the subconscious draws on the reality of our daily experience and uses “fragments of perceptions” to make sense of all the memories and feelings accumulated at the various levels of consciousness.
With the intuitive power typical of the artist, Joana creates reproductions of memories and sensations.
The long hours Joana spends sewing together the different layers, and embroidering onto the fabrics her motifs and drawings, have become a moment of meditation; another ritual by which she is able to observe herself changing through the process, examine her emotions and reactions and reshaping them in a different, better way.
The morning light has a symbolic value of rediscovery and illumination in almost every culture.
It’s the vital energy that is born again, renovated any new day, it is the hope of a new beginning.
This is a journey into the artist’s own inner life, into the core of her being, an act of courage of total acceptance of the woman she has discovered.
It is her fears, her desires, her joys and sorrows that she has been transforming into golden lines, enriched patterns, beautifully colored and poetic objects which express the joy of being alive.
What she creates is not immediately visible in its entirety. As in her morning walks, the beauty and the complexity of all parts of the artworks are visible to the viewer only after a process of discovery of all the details layered through the different levels. The exploration of each piece recalls the unveiling of a precious hidden treasure.
A similitude with the relationship with her own land: the place where she always feels the most alive and surrounded everywhere by poetry, constantly regenerating energy, beauty.
Gradually she has understood that what she was hoping to find in a journey abroad, she finally discovered in her own “home”.