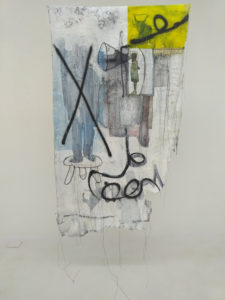 While Marcel Duchamp’s focus was on industrial objects, owing to the formalism and perfection of scale they represented, Kaloki turns to traditional African industry. And so the use of sisal ropes, in particular, is prominent. The sisal ropes are often hand woven and prepared in an intricate process that involves threading, weaving, and braiding, and which demonstrates the significance of pre-colonial industries that were disrupted with the onset of European imperialism and colonialism.

Liberation from Constraints of Representation

Like a conflagration, knowledge can sometimes consume and obliterate. The more one learns, about oneself and one‘s surrounding, it seems, the more one draws closer to an unstable self. But it is true that knowledge ravages and facilitates the detection of those social elements that can never be readily inserted into conversations. And this aspect of isolation that is a consequence of enlightenment and collision of information was central to Kaloki Nyamai’s exhibition, “Mwaki Nginya Evinda Enge” (The Fire Next Time), which was held in January, in Nairobi. 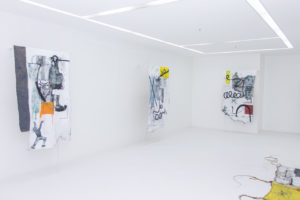 The exhibition was special, as it was the first show of the year at the Circle Art Gallery, and had set a fast pace for the shows to follow throughout this year. Kaloki Nyamai presented eight multimedia pieces, and which were titled in his native language, Kikamba, a language predominantly spoken outside Nairobi’s Eastern boundary. For the works on display, the artist explored with improvised, stitched canvas, as well as image transfers and an assortment of organic materials, including charcoal, sisal, and cow dung. Because of the use of these use of a local language as the entry point, Kaloki was certainly resisting the allure of a global market, especially by making his work, through the titles, accessible to a local audience. 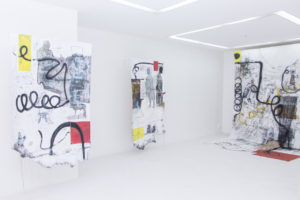 A coal dark spiral straddled across each of the artifacts, and with an enhanced layering perception, rendered the works chaotic. Not that the chaos was repelling, but rather constantly invited viewers to connect to the visual language, and to decipher the perplexing artistic vision. To compound the effect was the artist’s capacity to almost achieve a three-dimensional representation of objects on a flat surface, specifically by enclosing shadowy figures in squares.

If owing to the multiplication of subjects and objects on a single canvas, the artifacts were perplexing, then it is the insertion of charged elements that made Kaloki’s oeuvre haunting. Here, nature was both a material and subject. Sisal ropes prominently featured. In precolonial Akamba society, the artist had told me, sisal was useful as a currency. Hence, it is possible that with these strange and unusual materials Kaloki was simultaneously experimenting and exploring with new techniques and questioning capitalistic ideals. 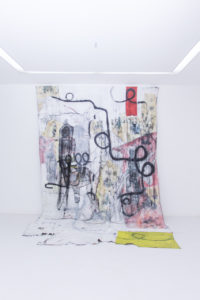 With his unique approach to image making, by employing a mixture of dung, dust, and charcoal, Kaloki’s method correspond to the late Catalan artist, John Tapies´s techniques. In his lifetime, Tapies produced enigmatic and visceral artworks that he categorized as “matter paintings.” Tapies utilized an array of unconventional materials that he mixed with pigments. The results were often intuitive works, which had the capacity to impact perspectives on reality. (1) Such traditions are also existent in the works of German painter Anselm Kiefer, who often incorporates ash and grass in his paintings. Kiefer’s “The World Ash,” is part of the permanent collection on display at the Staatsgalerie in Stuttgart, Germany.

Besides, Kaloki’s idealistic approach, and because of his humanistic and introspective bearing in image making, places his work as part of the conceptual art narrative. His ideals combine elements of the cerebral and visual. When one encounters his work, particularly with the inclusion of readymade elements, it is easy to perceive that he extends concepts that fascinated the French artist Marcel Duchamp. Duchamp often appropriated, manipulates, and integrated industrially manufactured components, as a way of inviting the viewers to contemplate beyond the ordinary and superficial. For example, Duchamp’s “Roue de Bicyclette” (The Bicycle Wheel), includes a bicycle spoked wheel and fork inverted on top of a white stool. 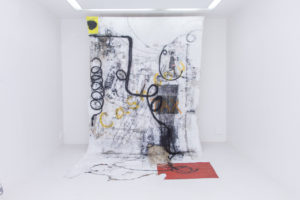 But it is the idea of dry art – of art that is disruptive – and which thrives on the viewer’s state of mind more than the visual representation that Kaloki captured. While Marcel Duchamp’s focus was on industrial objects, owing to the formalism and perfection of scale they represented, Kaloki turns to traditional African industry. And so the use of sisal ropes, in particular, is prominent. The sisal ropes are often hand woven and prepared in an intricate process that involves threading, weaving, and braiding, and which demonstrates the significance of precolonial industries that were disrupted with the onset of European imperialism and colonialism.

Just as the metaphor of fire, among the works on display, denotes the destructive nature of flames, it is also an agent of creation. Kaloki used fire as part of the creative process. Some of the canvases are irregular, scorched at the bottom, and evidently distorted with the exposure to flames. The allusion to fire is a recurrent subject in Kaloki’s oeuvre. In his early paintings, he often portrayed monochromatic images that he referred to as “slum-scapes.” The slum-scapes were mainly landscape paintings of makeshift structures and poverty. Although Kaloki today distances himself from his earlier approach, this early series was essential especially in exploring the temporal nature of these slums, and whose structures were constantly changing, and with them fragments of memories. As such, slum-scapes reflected on the transformation of Mukuuru Kayaba, a densely populated informal settlement at the edges of Nairobi’s industrial area, and where the artist was bred and educated. Here, fire was used as an agent of forceful eviction. The artist collected charcoal collected from scorched dwellings, and which he used to enhance the melancholy in his earlier paintings. 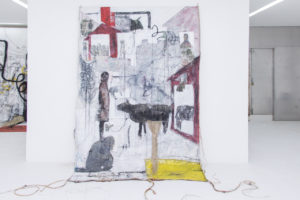 Even so, the show’s title revolved around James Baldwin’s collection of essays, “The Fire Next Time.” The collection explored the essence of being a person of African descent in an unjust world. More than anything else, Kaloki was in the process of reconciling with his identity, having had undergone a process of indoctrination, and being convinced that everything from pre-colonial African societies was primitive. The education systems in parts of Africa, in general, and Kenya, in particular, continue to neglect the usefulness of precolonial histories and legacies. In his second essay, “Letter from a Region of my Mind,” which is part of the essay collection, Baldwin observed that “to accept one’s past and history is not the same as drowning in it, but learning how to use it”. (2) Incredibly, the idea of western civilization has been imposed on the “black” population around the world; between there is also a possibility of reciprocation. Perhaps, the West can have one or two lessons on humanity to learn, for example, from Africans and the descendants of former slaves.

On the opening night of the show, Kaloki surprised the guests with a radical and effacing performance that invited the audience to reflect on the true meaning of blackness. Of course, blackness, as we understand it today, is a composite of injustice and disrupted histories. This injustice commenced with European invasion, then progressed to slavery, and later congealed into colonialism. In the performance, Kaloki stripped himself of all clothing and, sat on his haunches on top of one artwork; scooped ash collected from burned car tires, and flung them on his body and face. He began with slow movements and progressed into gyrated motion, as dust billowed around him, and the stupefied audience watched.

It is the commitment and vulnerability exhibited in this performance that left the audience spellbound. The artist’s body became a primary medium and focus. This particular performance was likely an extension of the “not black enough’ debate. Moreover, in early 2018, Kaloki held a successful show at Ebony Gallery in Cape Town, namely “I am Not My Father”,  in which he was denouncing the postcolonial leadership in Africa, specifically for their betrayal of nationalist and post-nationalist ideals. 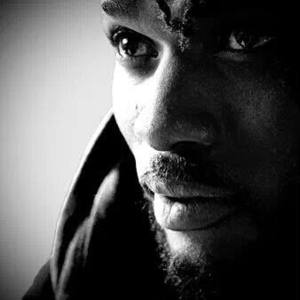 The show ran for two weeks and, like fire, it tormented and deformed thoughts. It opened a deluge of perspectives on race relations in a post-colonial and postmodern setting, in an increasingly changing world. In consequence of Kaloki’s radical approach, it is apparent that there is hope in retracing the past, and retelling history of the oppressed. Perhaps, as an allegory to the Biblical flood, no more flooding – with all its compromise and tolerance – it is certainly fire this time.

← ‘All Your Faves Are Problematic’
Africanah.org at 5: Emmanuel Iduma on double life of homosexual men in Nigeria. Like “facing the camera with one’s back.” →