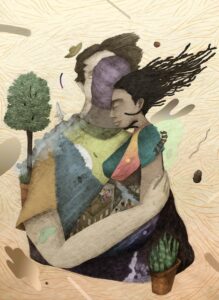 The figures in the exhibition were expressed in a way that concretized their historic circumstances as black bodies. Being immersed in a space that welcomes their lack of navigating their bodies in a culture that makes what is visual pedagogic.

The African artist Lisolomzi Pikoli had an exhibition at the 99 Loop Gallery that featured a show with strong personal and philosophical themes about space, personal development, history and origins. This article will discuss how these themes enable the black body to characterise a measure of the existential as historic, memory as pedagogic and space as related to language. This can be demonstrated to be informed by how the works were characterized by immersive environments and how the portrait pieces were finished with a tangible individualistic impact. The article will demonstrate that the immersive environments of the art works and the strategy of articulating figures from their backs created a metaphoric discourse related to coming of age in contemporary society for the black body. It will demonstrate that this is the strategy that expressed strategies of availability, unavailability and what is to come as pedagogic in contemporary society.

*
For example the piece titled “Lavida”, a work that features a woman in a melancholy atmosphere. Wearing a shawl with depth achieved through the markings around her, as if the artist makes a statement about the variety of possible influences on her psyche. Pikoli articulated sentiment with a measure of narrative that pronounced individuality. The figure was captured from her side, this way her emotional state can be demonstrated is internal, rather than capturing her front view in order to express her vulnerability. 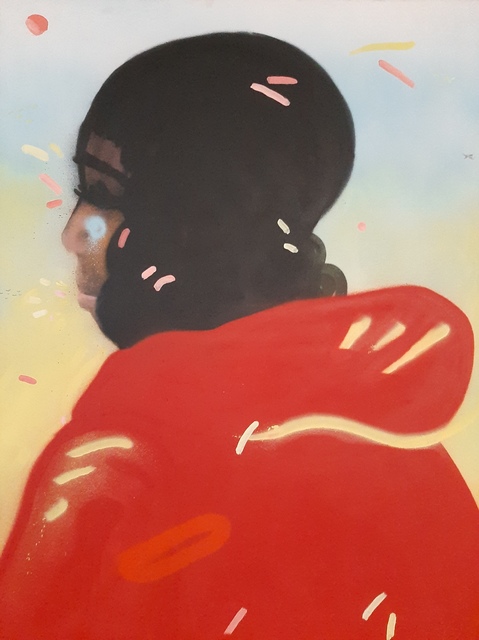 Pikoli achieved the unitary narratives of his subjects through creating works that were immersive and inundated. This strategy helped him achieve a uniting metaphor for his subjects regarding the pedagogical influence of space, language and the various historical and political visual cues one interacts with in contemporary society. This was reflected in the piece titled the “Cardinal’s Candy” a piece hat articulates the metaphor of visualisation. The male character in this piece occupies a space of expression, looking and internal visualisation are expressed with symbiotic implications. The sense of reciprocity informs the strategy of immersion, it also imbued the narratives of each piece with a measure of individuality. In the piece “Cardinal’s Candy” projectiles come out of his eyes while he holds flowers with a bird on his arm, the rest of the piece inundated with markings that create an impression of foliage. 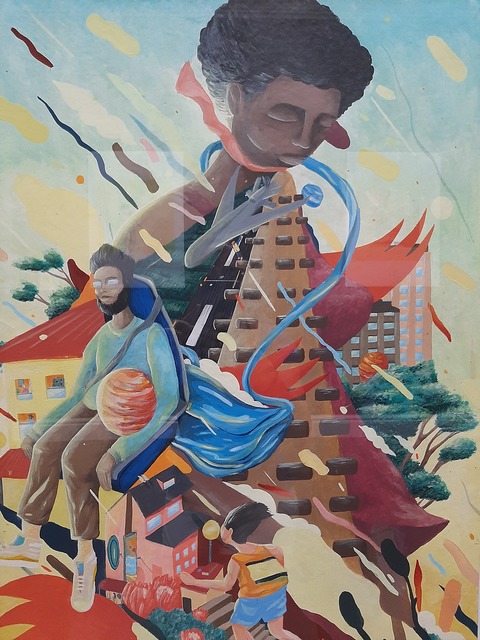 The artist stated in his statement that his work influenced by visual culture, his concern in this exhibition was the impacted that affects on an individual as he or she develops. The piece titled “Venus Rising” featured a variety of elements and signs like a young boy, a house, a woman and high-rise buildings. This piece resounded with nostalgia and a measure of searching. In that that is not just consistent with the implications of interacting with multi disciplinary mediums, but it expressed the spontaneous research that contemporary visual culture imposes on the artist. 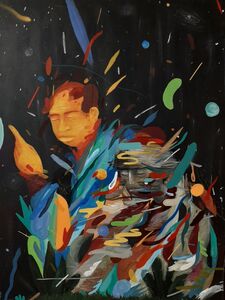 For example, the work titled “Sun and Moon” was also finished with an inundated impact, this way the inherent physical distance between the sun and the moon functions with the metaphor of necessary visualisation. What is in between might be characterised by disparity, what can fill that space is a measure of narrative that renders multidisciplinary as crucial. The metaphoric implications of visualisation were realised by the piece titled “1000 Dreams”, the metaphoric foliage markings also characterise this piece with visages peppered around with their eyes closed, holding flowers. Pikoli’s exhibition was an exercise that examined the measure of complacency that visual culture imposes on the artist, a statement that enables the distance between the sun and the moon to function as a metaphor. It also highlights the extent to which what we encounter can be defined by individuality. The dreams work is ostensibly filled with markings, almost covering the faces, with their eyes closed the implication of ‘dreams’ becomes tangible. 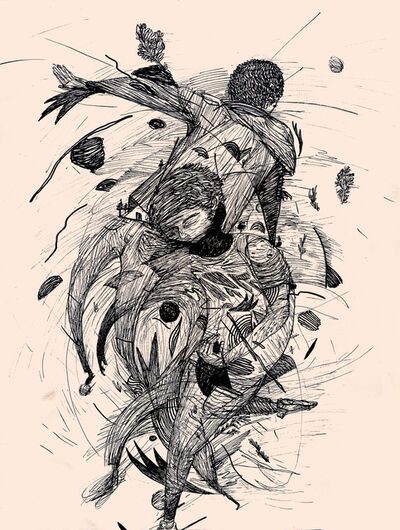 Pikoli’s exhibition was also an exercise in examining the role of accumulating a variety of visual influences and their pedagogic connotations. The work titled “Each One” clearly expresses aspects of coming of age in its variety of stages. The work articulated the coming of age of two women, a young girl in her early stages, and one she holding a book. This piece is an example of the four minimalist works in the collection, the piece also captured the figures individual narratives from their backs. This strategy affected the implication of what is to come in their narrative. Creating the implication of the metaphoric connotations of what is available or open and what is closed and unavailable in the strategies of visual culture in contemporary society.

*
Access and its politics are imbued with an historic discourse through pedagogic implications in the exhibition. The artist achieved this by focusing on the body as limited or as limiting. This way the role that memory plays in the immersive narratives of the exhibition became symbolic and relevant to both the individual and the collective. This is reflected in the piece titled “Life Still” a piece relies on the politics of art that is considered still life, a space where ascribing meaning and it’d reliance on subsequent development of ascribing enables historic discourse. Relying on the body or physical faces as symbolic like in the piece “Life Still” the artist was able to demonstrate how still life as a genre of art relies on memory and the space for the audience to ascribe in order to incite what is historic. Pikoli represented this power the audience has through immersive environments; in this piece this was pronounced by the two faces in it being distant yet close between the curt and compact brush strokes. 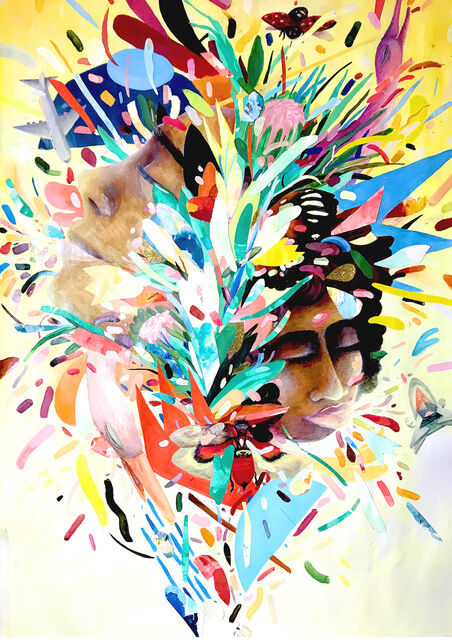 Pikoli demonstrated that for the black body coming of age is a stage that is about independence but in a contemporary space where the black body is on the periphery, this being reflected by the angles from which he articulates the body. Never in full view, only partial and since the show is about coming of age, in spaces where the black is encountering influences for the first time. Like the piece “She Moves” the sad and melancholy figure in the piece is alone, one of the few pieces finished like this. The artist achieved in this piece a discourse of biology that is about development and symbolic encounters. This way what is to come can be about availability and what is to come. Pikoli relied on the open space of the surface to symbolically represent the space where the body can be immersed in what is open and bare. He placed the body in this piece in a space where memory and ascribing are necessary, a space where body language speaks like a still life.
Pikoli’s exhibition was political to the extent that one is conscious of what is unavailable and available, the artist was not interested in what has passed, rather it is what is to come that characterised the metaphoric language of the exhibition. The figures in the exhibition were expressed in a way that concretized their historic circumstances as black bodies. Being immersed in a space that welcomes their lack of navigating their bodies in a culture that makes what is visual pedagogic. Pikoli was able to create works that articulate the beginning points of memory as a guide, but also as both contemporary and historic spaces for the encounter of lack and availability of pedagogic strategies for the black body.