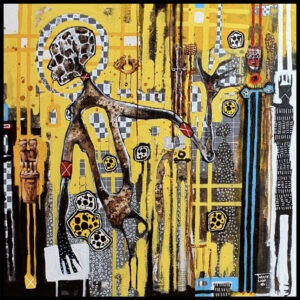 His style and the themes he deals with reflect his cosmopolitan life journey and his West African origins. Descendent of a royal family of the Akan people in present-day Côte d’Ivoire, Mederic only got to know his country of origin as a teenager when he returned from the United States where he grew up. His cultural mix which explains his constant quest for balance in duality influences the way he builds his works.
Trained in Fine Arts, he easily got rid of stylistic constraints by drawing from the material and the process which allows him to best express his point. This is how he combines his talent for music and writing with his passion for painting and sculpture, multiplying albums and first artistic prizes. The maturity and humility he acquired through travel and meetings with other recognized artists of his generation and the previous one allowed him to focus on the visual arts and to assert his unique style. 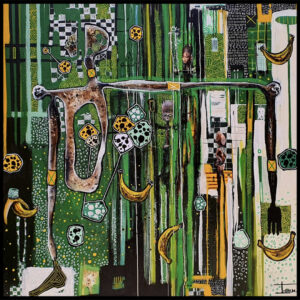 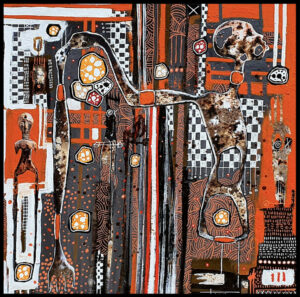 On the canvas, he captures scenes of life that represent frozen moments and encapsulate the dynamism of the action of living nature that he interprets. His textured works, which combine painting, collage, and drips, stimulate all the spectator’s senses. They arouse a series of emotions and invite contemplation but also and above all, reflection.
In his treatment of often deep and deeply moving themes such as those of child soldiers or migratory journeys for tragic ends, he constantly incorporates glimmers of hope. The complexity of his subject is balanced by an expressionist style and a frame that unfolds with strong referential elements, landmarks, and hooks that make the reading of the work more accessible.
In fact, Mederic’s works read like poems, rhythmic and harmonious. He plays with the artistic worlds by deconstructing them and reassembling them in his own way. His message is thoughtful but his composition spontaneous: transcribes the energy of the moment. Sometimes his chromatic palette is rich and vibrant and he intertwines the most vivid colors, sometimes coffee grounds which he uses in addition to oil paint, as a pictorial layer, darkens the work and makes it melancholic.

The balance of life forces, symbolized by two complementary forms: the cross and the spiral, in a way his yin and his yang. The spiral, round and infinite, refers to the movement of the cosmos, the dynamism, the creative fertility. Conversely, the cross, rigid in straightness, symbolizes anchoring, stability, and material concretization. It is most often in the eyes of his characters that he inserts these cosmogonic symbols. For him, the balance in duality leads to happiness. 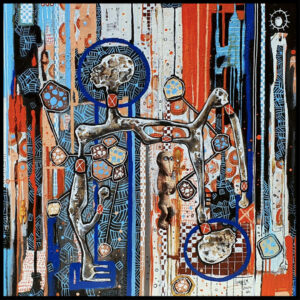 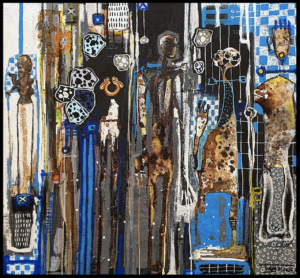 The Call of the Ancestors

Having traveled the world all his life, Mederic is now looking for roots. This new decade coincides with this defining moment, when he feels the need to connect with his origins. “Art above all, you have to feel it,” he says. This is how his new project explores his cultural and artistic heritage more head-on. There he stages the creations that Picasso called in 1917, “rigorously logical” and “more beautiful creations than the human imagination has ever produced”: the ancestral masks and sculptures of Africa.
This new project, which required intensive research work and a transformative interior journey, is part of a process of cultural reappropriation, which gives his quest for identity a highly symbolic dimension. He went to revisit ancestral sources to materialize the intangible link between the visible and the invisible, between the natural and the spiritual, as African master sculptors have done for generations. The Baoulé, Dan or Fang masks staged become the protagonists and Mederic lets himself be guided by the ancestral power that they shelter. “Painting is an experience as such, I’m just living the experience,” he says. A project that should be understood as a tribute to those who preceded it and to his land of origin: Africa.