Rudy Shepherd’s latest work explores the nature of evil through the mediums of painting and sculpture.
Over the past six years I have been making work that explores the nature of evil through the mediums of painting and sculpture. This exploration involves investigations into the lives of criminals and victims of crime. I am exploring the complexity of these stories and the grey areas between innocence and guilt in a series of paintings and drawings of both the criminals and the victims, making no visual distinctions between the two. By presenting the people first and the stories second a space is created for humanity to be reinstilled into the lives of people who have been reduced to mere headlines by the popular press.
Going along with these portraits is a series of sculptures called the Black Rock Negative Energy Absorbers. These sculptures are meant to be a counterpoint to what can seem like a vast, unsolvable problem. They pose a solution, while at the same time questioning the viewer’s belief in the power of art, and the power of belief. These have taken the form of a large outdoor public sculpture at Socrates Sculpture Park in 2006, human scale works in 2008, and then small scale ceramic pieces called Healing Devices in my most recent solo exhibition at Mixed Green Gallery in 2012. 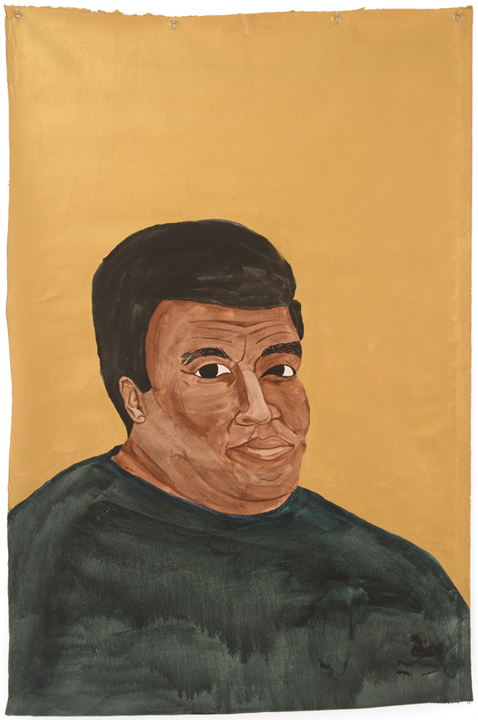 The Healer project, a video project shown in my most recent solo exhibition at Mixed Greens Gallery, continues this line of questioning by creating a fictional world in which magic is real and people are changed by the healing powers of a mystical being. The Healer, an outgrowth of the Black Rock Negative Energy Absorber sculptures, moves through the world in a state of detachment; he is an invisible man. Much like the Bear character in my previous 2005 video project, The Healer both leads us to contemplate intermediate spaces—those between binaries such as “good” and “evil”—and serves as a self-portrait in which to explore feelings of social and political frustration, isolation, and impotence. 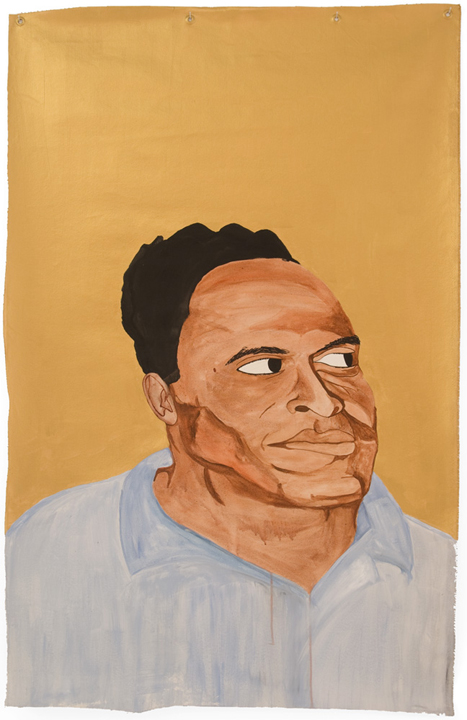 In the video, the viewer observes the Healer doing everything from walking the desert like a shaman to pouring milk in his kitchen. Instead of demonstrating concrete abilities, the video captures The Healer wandering the earth in a manner neither wholly apart from its activities nor entirely part of them. To emphasize a lack of narrative resolution, I developed a computer program using Max MSP, in collaboration with Penn State graduate student Ian Brill, to randomly sort the scenes live as the video is playing. The result is a never-ending series of contemplations with no beginning or end.
The Healer Project was shown alongside a series of paintings that draw heavily on photos from news sources and seek both to present the events captured by them in a more nuanced, complex way and to grant these otherwise disposable images a newfound permanence in our collective consciousness. Examples include a house torn through by Hurricane Sandy, the Libyan and Syrian rebels fighting for their freedom, and the White House Situation Room during the assassination of Osama bin Laden.

In the media, and oftentimes in our society, we make efforts to articulate clear lines between acceptable and unacceptable behavior, between the good and the bad. As a result, individual people are made into moral or ethical examples, but at what cost? Is the oversimplification of issues and the divisiveness we see in the reportage of the news making it more difficult to understand and empathize with one another? My most recent work is an exploration of these questions, which I engage through an ongoing dialogue with news as it unfolds.
Based in New York City, Rudy Shepherd received a BS in Biology and Studio Art from Wake Forest University and an MFA in Sculpture from the School of Art Institute of Chicago. He has been in group exhibitions at P.S.1 Contemporary Art Center, NY, The Studio Museum of Harlem, NY, Bronx Museum of Art, NY, Art in General, NY, Triple Candie, NY, Socrates Sculpture Park, NY, Cheekwood Museum of Art, TN, Contemporary Museum, Baltimore, MD, Aldrich Museum of Contemporary Art, CT, Southeastern Center of Contemporary Art, NC, Museum of Science and Industry, Chicago, IL, Tart Gallery, San Francisco, CA, Analix Forever Gallery, Geneva, Switzerland and solo exhibitions at Mixed Greens Gallery, NY, Regina Miller Gallery, Carnegie Mellon University, Pittsburgh, PA. He has been awarded Artist in Residence at PS1 National/International Studio Program, PS1 Contemporary Art Center, Long Island City, NY, Artist in Residence Visual + Harlem, Jacob Lawrence Institute for the Visual Arts, New York, NY and Emerging Artist Fellowship, Socrates Sculpture Park, Long Island City, NY, Artist in Residence, Location One, NY and most recently at the Process Space Artist in Residence Program Governors Island, Lower Manhattan Cultural Council, New York, NY.
He is currently represented by Mixed Greens Gallery, NY.