Nick Whittle: This Is Not My Land 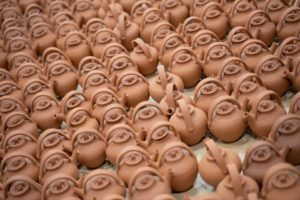 The work of Nick Whittle is the journey of an artist who probably started candid and full of expectations, but who soon grew into a confrontation with himself. To arm himself or to come to terms with it, he had to immerse himself in the history of Barbados and England. This history not only provided him with the necessary insight, but also presented him with the symbolic visual language that gave him the opportunity to express his aversion to it, make it visible and apologize for it.

Rob Perrée on the work of Nick Whittle (Birmingham/Barbados).

This is not my land

On the work of Nick Whittle

Once more I walk this shore
picking at pebbles and shells
catching the sun and tasting salt
without mind on date or hour.
Watching Atlantic roll her tongue
churn sand to storm and smooth a stone
for me to find for you.
Everyday we sit and watch
marking time with tide
wave after crashing wave
running together without end.

*
A melancholy poem by an artist who takes the past and brings it into the present. Moreover, he is an artist who can’t be described separately from his biography.

*
Nick Whittle is originally from Birmingham (UK). On his mother’s side Scotland is also in his DNA. He has enjoyed his education in England. There he met his future wife, a fellow student. Because she wanted to return to her motherland Barbados in 1979, Whittle decided to follow her. A step that might have been easier because he already had the feeling in England that he was an outsider, that he was not really part of his environment. That this theme of ‘belonging’ would haunt him is obvious. After all, we talk about a white man who stepped into a black family on an island that is more than 90% black. An island with a loaded history, in which the British in particular played a dominant, dubious role. Glasgow’s ‘Merchant City’, for example, thanked its prosperity to the slave trade. The British had occupied Barbados in 1627. Only in 1838 did they abolish slavery, twenty years after the population massively revolted (‘Bussa’s Rebellion’) 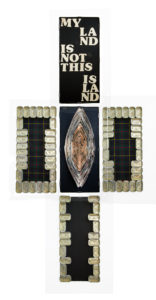 Nick Whittle is a thoughtful artist – which does not imply: averse to risk-taking – who sees his work as the documentation of an intellectual search. A search for the (emotionally charged) history of his new homeland, a search for the way in which he has to relate to that new homeland, a search for his own identity in which England, Scotland and Barbados fight for priority and in which sexuality seems to determine the undertone. He does so through a wide variety of disciplines and materials: collage, assemblage, painting, sculpture, installation, video and, last but not least, poetry. His choice of medium helps to convey the nature of his ‘message’ and that the medium will be guided by his indomitable need to find new forms. He always makes sure that this message is ‘dressed’ aesthetically. He doesn’t like committed art where one tends to lose this aspect.

*
In his exhibition at the Queens Park Gallery in Bridgetown -more than 10 years ago he had a solo in the same gallery – many aspects of his subject matter come together. 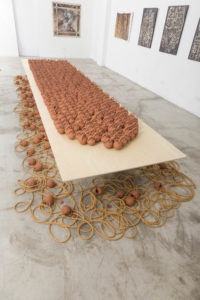 One of his most striking works in the show is the installation Ancestors from 2017. On a platform in the shape of a ship there are hundreds of monkey pots. Originally used by African slaves to keep water cool when preparing food. That’s how they ended up in the Caribbean. Because they are not all equal in form, they also stand for the individuality of slaves in this installation, in contrast to the view of the trader who considers them as cargo. Under the ‘boat’ pots are tied together with rope. They refer to the status of prisoner which was forced upon the slave during transport.

The shape of a ship as a symbol for the Middle Passage is more often reflected in his sculptures. Because of the drawing that the abolitionist William Elford made in 1788 of a slave ship, this form has become a symbol of the resistance against slavery. (see After William Elford, a work that can be seen as a tribute). With Whittle resistance often carries the burden of a mea culpa. As a white man in a black environment, he sees himself as an exponent of the colonizer.

He carries out the form of ships with all kinds of materials: for example with paper (Middle Passage – Her Stories, 2018), reed (Confiteor, 2018) or jute (Drummers, 2018). He also fills her in various ways. For example with empty sardine cans, or inverted (cola) cans. The first stand for the lack of freedom of movement in the hold, the second refer to the massiveness of the transports or, more cynically, to humans as a mass product. That is why in some cases they are positioned as an abstraction of the human form. In other works, the positioning seems more like a cross. It is guessing what the interpretation can be. Colonization under the guise of missionary activities? The cross as a symbol of victimhood? The cross as a Western symbol of faith versus the faith of the African qualified by the same West as superstition? 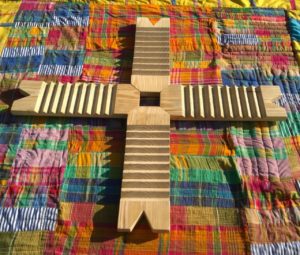 Without making that explicit, Nick Whittle shows respect for women in his work. Sometimes it can be read literally because he assigns a work to a woman (For Edna, For Beverley). Four Women at Three Houses Spring is the most striking elaboration of this. There are four wax boards on a surface of colorful Madras cotton. With the ‘heads’ towards each other. As a big +. The back story is that Three Houses is a park in St. Philip where women came together to bleach the laundry on the lawn, but also to meet each other and make friends with each other. To feel strengthened in confrontation with an environment that was no doubt threatening. Another work in this the same context is Middle Passage – Her Stories. Ten black boats are fixed on a washboard. The work looks like a small monument for the black woman.
In a few works the boat shape must be seen as a female form. In Against her Will a male form penetrates violently through it. This expressing the concept that slavery and rape are each other’s blood brothers.

*
My Land
this
is not my land
is not my right
my white skin
not from st john
nor strathclyde or
lamming’s belleville
but my skin is white
all the same
taxi sir
take me back
back to the whipping
whipping black skin
skin torn with sadistic joy
joyful and triumphant
triumphant for three hundred years
victor ludorum
this
is not my land
is not my island
my white skin
stained with dishonour
for ever washing
washing and washing
out damn spot
(Fragment from My Land, 2001)

The work of Nick Whittle is the journey of an artist who probably started candid and full of expectations, but who soon grew into a confrontation with himself. To arm himself or to come to terms with it, he had to immerse himself in the history of Barbados and England. This history not only provided him with the necessary insight, but also presented him with the symbolic visual language that gave him the opportunity to express his aversion to it, make it visible and apologize for it. That sounds simpler than it is. In addition to visual means, Whittle also used the power of the word. Although he does not like to call himself a poet – Barbados has a rich literary tradition – his poems are indeed an important part of his what seems to be his eternally long, probably often lonely journey. The above poem leaves no doubt about that. It would be great if they had a more prominent place between his visual work at a presentation. They would strengthen each other’s poetry. 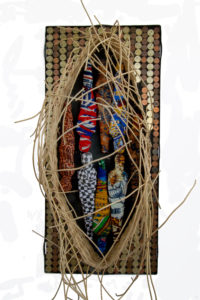 In a skype conversation I had recently with him, he spoke about the desire to return to that period of time that is described in the poem at the beginning of this article. The uninhibited walking along the waterfront, looking at the movements of the sea, the beauty of the water, without being hindered by anything.

*
As to whether that period comes back? His work seems to convey the doubt.

Rob Perrée is art historian, independent writer and curator, founder and editor in chief of Africanah.org. He lives and works in Amsterdam and Brooklyn.