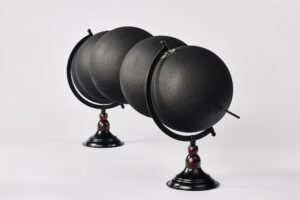 If anything, Conditions, small as it might seem, is a really dense exposition to a very complex issue that needs the visitor to take their time in perusing each work.

The age-old debate on whether or not the earth is round or flat, appears to have received a new breath of life and as such, an entire following of flat-earthers has arisen, boasting a steadily ascending loyal base. The 2018 documentary, Behind the Curve, currently streaming on Netflix, captures the excitement and resurgence of flat-earthers in the U.S. The film follows the journeys and thoughts of the flat earth theory luminaries and proselytisers, particularly YouTuber Mark Sergent, pulling no stops in trying to disprove science’s long held thesis about the spherical shape of planet earth. The debate itself isn’t as exciting, partly because of the underlying religious fanaticism that subtends the flat-earth theorist’s anti-science streak. Perhaps, like “the god debate” of the previous years which pitted science and religion in an unproductive polar oppositional grip, the flat-earthers don’t present anything controversial about the authority of scientific fact.

Interestingly, this encounter coincided with the opening of a new art exhibition at Goodman Gallery, Johannesburg. In this current exhibition, titled Conditions, South African visual artist Nolan Oswald Dennis seems to punctuate this wrangling from an unthought, but nevertheless perennial, position. Unlike the flat-earthers who are interested in disproving the spheroid shape, Conditions interrogates its unspoken assumptions and associations. One being, to quote the exhibition statement, that ‘The spherical globe is the idealised figure of the planet in Western cosmology: seamless, smooth, unitary and knowable’. Though not so obvious, the rhetoric of perfection borrows its assumption typically from western metaphysics that has obsessed about aliens as it does about invading unknown territories. This invasive and stereotyping approach has as much over-estimated the importance of planet earth as it also presumed that the globe was personal property of the western world. In other words, not only is the western world a world unto itself, separate from others in very fundamental ways, but also, ironically, must coexist in it only as a self-imposed sovereign.

This notion of the world, represented by the spheroid, has historically functioned as an epistemic item through fantasies of discovery, expansion, colonisation and destruction of the world. This prevailing assumption of the universality of western paradigms depends on the construction of an alter — primitive, nonexistence and res nullius — to establish the Occident as the civilising agent. These unknown and unknowable territories are socially, politically, culturally, and religiously prefigured and judged against the western cultural norms, conceived as universal, consistent and exemplary. But how is it that in its colonial and imperial efforts, western scientific thought has pushed the round-earth theory in conjunction with the Judea-Christian religious beliefs that posit a contradictory cosmology? Though arguably not a party to the above-mentioned duel, Dennis interrogates these underlying racial logics, perceptions, and affects that pervade theories of “the world.” In other words, whether flat or round, the suggestion is that something seems commonplace and that is, their shared “fear of the black planet.” Palpable and deadly, this fear or myth fuels the doctrinal justification for unwarranted violence and colonisation 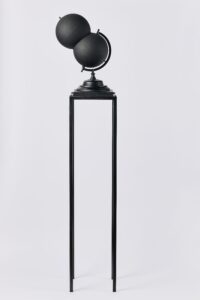 Without the violence of deep deracination elaborated by racial capitalism, the coherence of worldliness loses its integrity. To paraphrase Frank Wilderson and Patrice Douglass, we therefore need to start imaging the metaphysical violence of world construction rather than simply relying on a metaphysics that violence destroys. The structures of destruction should be as much subject to critical scrutiny as is the much needed work of history remembering and recovery. In its now classical 1990s hit song, Fear of the Black Planet (also title of the album, which Dennis uses in the exhibition) Hip-hop crew Public Enemy create several scenarios of anti-black racist encounters in which the irrational and ethnobiological fears are weaponised. In one of their verses, hip hop group Public Enemy direct our attention to how racial difference becomes the mark of contamination and deviancy. They ask, ‘What is pure? Who is pure? Is it European?/ I ain’t sure/ If the whole world was to come through peace and love/ Then what would we be made of?’ If, as black theorists insist, that the Western world needs blacks, such that if they weren’t around, they’d invent them — without anti-black violence the world loses its social and symbolic legitimacy. 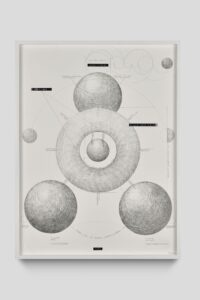 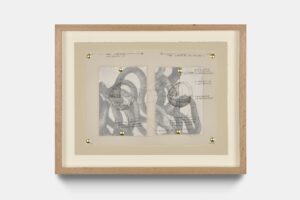 Conditions drives us to venture into these terrains of the unthinkable, which is to say delegitimised, thoughts. Using different mediums of expressions such as installations, sculptures and even drawings — Dennis makes the spherical form both his object and subject through which he draws out these problems of antiblackness. Perhaps unlike his sculptures, Dennis’ drawings show the kind of astute and precisionist keenness of his draughtsmanship, that at times could pass as archaeological, topographical and even medical illustrations. The diagrammatic pictoriality of these drawings, together with their deliberate incorporation of textual indexicality, can also seem slightly abstract. And yet some of these non-representational forms are realistic observations of our material world. This blurring of abstraction and realism renders the split between these modalities anachronistic. With a kind of godly surrogacy, Dennis studies his objects by profiling the planetary structure of the world — above, below and everywhere. However, these drawings still retain the seductive aura of well executed and attractive line forms, with intricate detail and energetic complexity. In his ink drawing on altered map untitled (for achebe), Dennis shows an isolated African continent (inside globe form) turned upside down. But upon a second look, one can also see that the singling out of the African continent into a ball-like structure seems to be candidly captured in suspended motion. At the bottom of the drawing it says “no condition is permanent.” 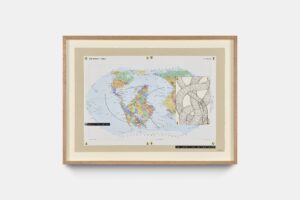 As a visual motif, the globe becomes the site and sign of extractive and destructive common-sense of western metaphysics. The very idea of being-black-in-the-world can only mean being a tenant, trespasser or even refugee whose residential papers are always already expired and impossible to renew. This makes inhabiting the world as blacks untenable. If space and time is defined by the anti-black terms and conditions set by a singular force that has imposed itself and its episteme, black people are not of the world even though in it. As one author once said ‘Black life is not lived in the world that the world lives in, but it is lived underground, in outer space.’

This becomes an important aspect for Dennis’ exhibition, or its outlook, namely, ‘a black cosmography (where black is a vector that opens toward hidden conditions of space and time).’ What would it mean to think the world from the perspective of those excluded from within it? Thus what is central to Dennis’ intervention is also the very idea of the black planet itself, which on the one hand, it is curiously constructed as a black mimetic spherical reproduction of the round world but on the other hand, it is disfigured, sliced into two-halves or conjoined together like a strand of pearls. By reproducing the rotund sign as black, Dennis clearly shows how raciology contaminates scientific discourse. But by cutting and reconfiguring the plaster and concrete spheres into multiple alter-native forms, he enters into a new cosmography. 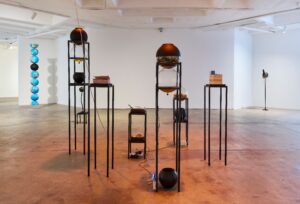 In the installation titled garden for fanon for instance, he strategically places differently sized plinths assembled together and places on top of each of them — books, calabashes, earthworms etc. all connected together through some benign electric contraption. The theme of Fanon’s garden has been explored by the French-Algerian artist Mohamed Bourouissa in his recent documentary film, The Whispering of the Ghosts, which is on Fanon’s former patients from the psychiatric hospital of Blida-Joinville. But unlike Bourouissa’s film, Rashid Johnson’s Antoine’s Organ or even MadeYouLook’s Ejaradini Project — Dennis’ speaks to this concept of the garden figuratively. To pay homage to Fanon, Dennis piles on some of the plinths copies of Fanon’s 1961 classic The Wretched of the Earth (some copies in tact and others disemboweled). Interestingly, for a number of mid-century social movements and intellectuals The Wretched was referred to as “The bible of the third World.” This was partly due to the massive influence of Fanon’s thoughts, particularly, his revolutionary call to reconsider and re-evaluate the question of “mankind.” The theology of the garden, it seems to me, speaks to the theme of recreation from the standpoint of the oppressed. Thus, Dennis’ deconstruction of the spheroid undoes what we have taken as commonplace. For Fanon himself, self-recreation is also a kind of model through which we are able to confront, resist and escape the trappings and sterility of colonial conventions. In fact, he concludes The Wretched by imploring us to ‘flee from this motionless movement where gradually the dialectic is changing into the logic of equilibrium.’ 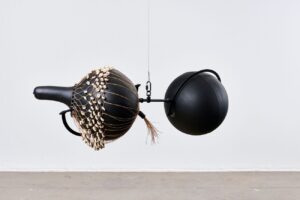 Interestingly, these are not the only texts (literary or otherwise) displayed in the exhibition — that is besides Public Enemy album and homage to Achebe (both mentioned above). Amongst others, there is also Ali Mazrui’s Towards a Pax Africana. From titles of artworks, lines in artworks or even actual books in the show, citation plays an important role in this exhibition. But what compels this citational overflow? Is it  a case of making contemporary artworks more legible and accessible? In other words, are quotations, references and other literary marks in visual art, media providing the kind of articulatory crutch to help fill the enunciatory gaps which works of art tend to liberally leave hanging? Here I am reminded of Michel Foucault’s famous words on why he never quotes Marx, or quotes him without quotation marks. Foucault’s answer is simple, people are incapable of recognising Marx’s texts — after all, he adds, ‘When a physicist writes a work of physics, does he feel it necessary to quote the work of Newtown and Einstein?’ Couldn’t the same be said about an artist “quoting” another work of art, if that is even feasible? Nevertheless, these provocations do not cancel out the thoughtful work that Nolan Oswald Dennis has put together in this exhibition. If anything, Conditions, small as it might seem, is a really dense exposition to a very complex issue that needs the visitor to take their time in perusing each work.