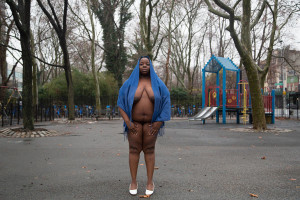 Recently the artist Nona Faustine kicked up some ruckus with her White Shoes photography series, which consists of images of the artist posing nude at former sites of slave trading in New York City. One principal site Faustine uses in the series is the location of the city’s first slave market. In the heart of the city’s Financial District, specifically on Wall Street between Water and Pearl Streets, a slave market, which was defined by a wooden structure with open sides and roughly a capacity of 50 people, bought and sold humans. It functioned until 1762. 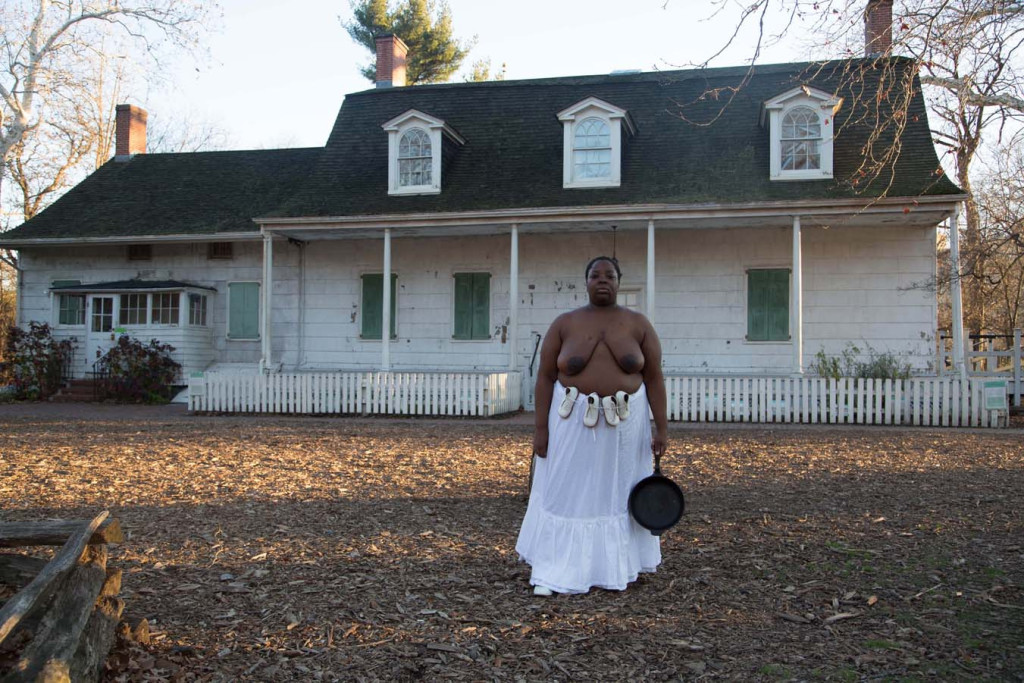 For White Shoes, Faustine posed at several other locations, including the steps of Tweed Courthouse at 52 Chambers Street and the Supreme Court at 60 Centre Street. She relates that many slaves were buried in the grounds around where City Hall now stands.
In an image titled “From Her Body Came Their Greatest Wealth” (2013) Faustine stands on top of a small wooden box placed in the middle of a Financial District intersection, her hands clasped together in front of her belly, below her breasts, her head held level, wearing nothing but white shoes on her feet. This is powerful imagery, not the least because a naked, female body in that (bleak) landscape of abstracted wealth manipulation and fugitive natural light seems like an interruption, a rupture in its discourse of capital flows, a break in the professional and intellectual networks that weigh and measure worth and assign monetary value. Faustine concretizes that abstracted worth lost in the obscure language of financial transaction that allows us to obfuscate and ignore odious parts of our collective history. 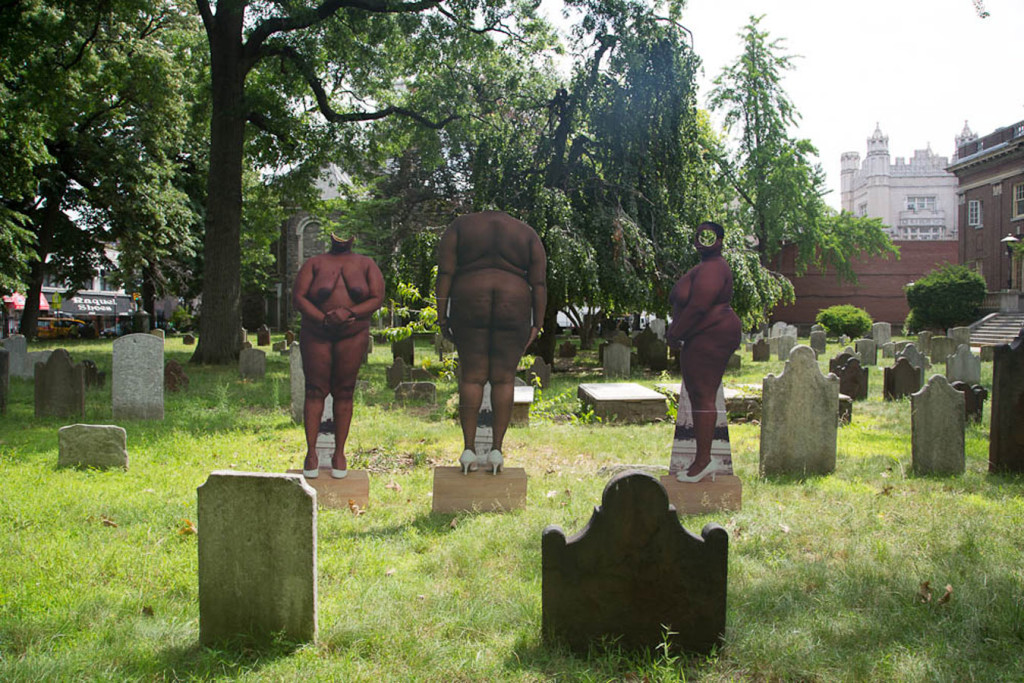 Nona Faustine, “Of My Body I Will Make Monuments in Your Honor” (2014) is taken in a Dutch Pre-Revolutionary cemetery in Brooklyn where three slaves are buried among the settlers.
Faustine’s body does not readily participate in the popular market of heterosexual male desire where sex is a commodity: She is large, matronly, with a body that seems capable of strenuous physical labor, not lithe or winsome. This aspect of her physical presentation is an integral part of the piece, because she is saying something else with her naked body. Lucille Clifton’s poetry suggests what this may be. The following poem by Clifton, which is not titled, was published in the 1970s and clarifies for me what Faustine accomplishes with her self portraits. It’s worth considering the entire poem: 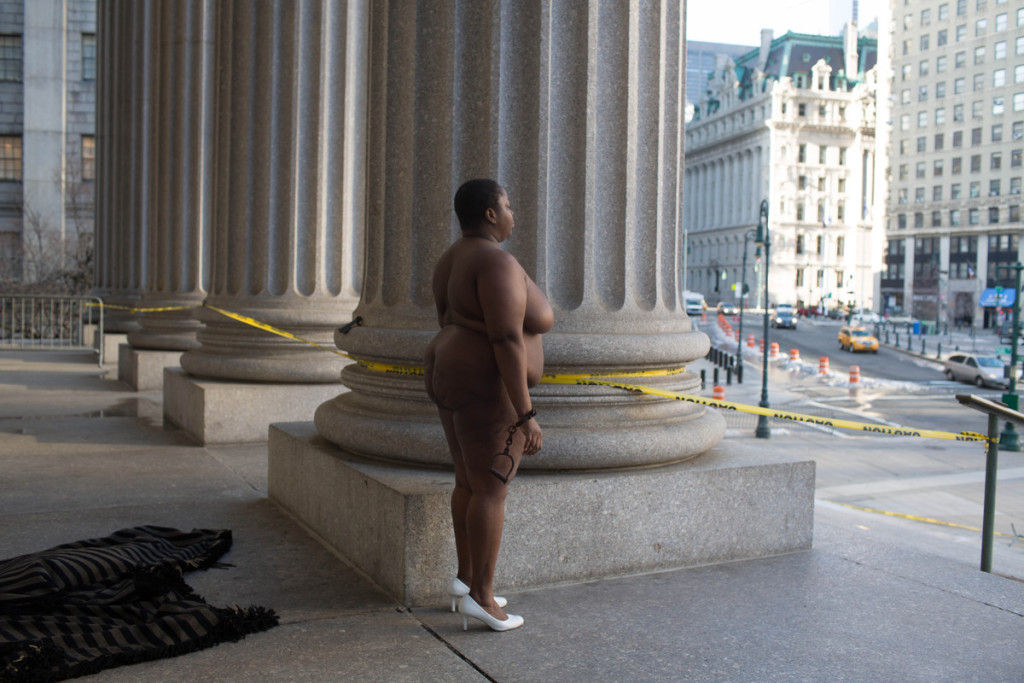 There are some obvious contrasts with the image of the black woman in this poem, who stands her ground and stakes her claim to property ownership and middle-class membership. But her body is still (some 60 years and more later) radical, especially when it nakedly pushes against the glass that separates the domestic domain from the public social one. Faustine breaks that glass by similarly declaring that she is some body in a new thing, a new dispensation of political and social awareness that makes patriarchal white supremacy (once quite safe and secure in its abstraction of black bodies as property) have continual moments of self discovery. 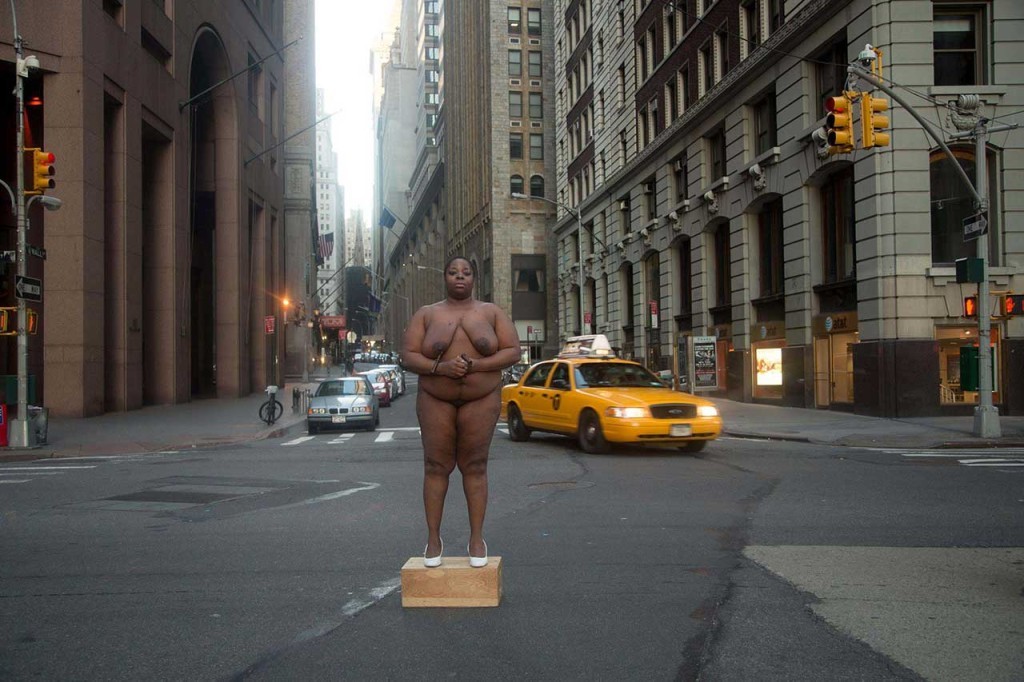 From Her Body Sprang Their Greatest Wealth Wall-Street, 2013.

I know of no reported incidents of white man experiencing psychotic break to run through the streets naked, but there are many white men (as a stand in for patriarchy in general) losing their shit and responding violently over this relatively new social order. Faustine points to this new thing, this new social order in which the being of black women is no longer circumscribed by the sphere of domestic action. They are activists, judges, CEOs, artists, and sometimes oracles who remind us that our financial systems are founded in blood.(copyright Nona Faustine)