Portrait of a Friendship 2: Richmond Barthé and Richard Bruce Nugent 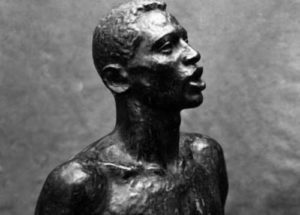 This is the second article in a series of articles on the friendship between two African American artists, a “friendship beyond understanding”. In every article The Harlem Renaissance plays a role.

Portrait of a Friendship 2

In December 1928 the artist Richmond Barthé sits in the audience when the play ‘Porgy’ is performed. In Chicago, in very cold Chicago. It is a piece about a disabled black beggar who lives in Charlston’s slums and fights for his great love Bess. It is written by white authors but played by an African-American cast. It premiered on Broadway in New York a year earlier. In 1935 it will form the basis for the opera ‘Porgy and Bess‘.

Richmond Barthé is then a young artist, born in 1901 in the South, in St. Louis, who got the opportunity to study at the Art Institute of Chicago thanks to the support of a number of local money lenders. At first he chooses painting as a medium, but soon he realizes that making sculptures suits him much better. In 1929 he moves to Harlem and meets the artists, writers, theater makers and musicians who gave Harlem his first renaissance. He quickly grows into a successful artist who wins many prizes and does not have to put in much effort to get interesting assignments. For his work he is inspired by theater and dance. He makes intimate sculptural portrait heads and studies of the classic human figure. “As God made it.” Especially the male body. He usually models for that himself. He even takes ballet lessons to master the language of the body in motion. 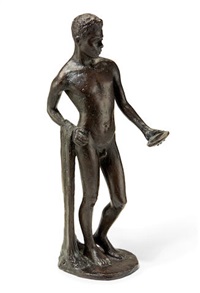 His success is remarkable because the subject of his work – the naked body – is considered off-limits to black artists in his day. Being able to defend his work as the ultimate representation of pride in the black body, it falls well in a community that has celebrated ‘The New Negro’ in previous years, a movement that has just paved the way for the black artist to make his abilities and pride visible and audible for the first time.
On that night in 1928 he sees Richard Bruce Nugent playing his part in ‘Porgy’. Center stage, the spotlight on him. He decorated the stage, as a critic will describe it, referring to his silent beauty.

Barthé falls head over heels for him. 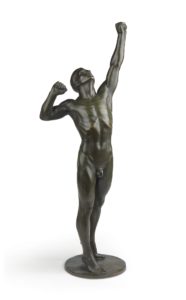 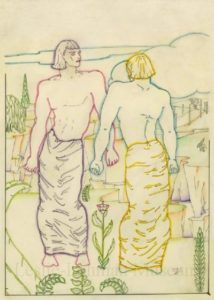 Richard Bruce Nugent is then 22 years old. A black young man who acts, writes (for instance the novel ‘Gentleman Jigger’), illustrates and makes art. An artist who plays an important role in the Harlem Renaissance. Actually, ‘artist’ is too restrictive a word. He is more than that. Nugent is a phenomenon. He is proud of his black self and wants to show this in all kinds of ways, including the unusual. In 1925, he meets the poet Langston Hughes and the philosopher Alain Locke in Washington DC. , at one of the many ‘salons’ that were common at that time. Together they ensure that a poem by Nugent – Sahdji – is included in The New Negro, the anthology that Locke has put together to underpin the cultural revival that will go down in history as the Harlem Renaissance. Hughes also manages to get another poem by Nugent – Shadow – published in Opportunity magazine. Moreover, he introduces him to Carl van Vechten, the white theater critic of the New York Times who is an indispensable go-between between black artists and the world of white publishers and money lenders. 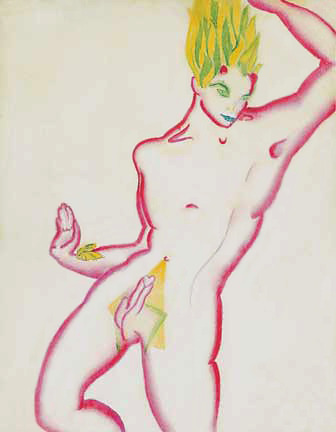 In 1926, Nugent was one of the founders of FIRE !!, a magazine of young writers and artists who call themselves the Niggeratti in order to characterize their progressive attitude. The stories and poems in FIRE !! could never be published in existing black magazines like The Crisis and Opportunity because of their controversial content. Nugent writes a gay erotic story for it: Smoke, Lillies and Jade. The first homoerotic story by an African American author. Promiscuity, interracial and abusive relationships play a role in the other stories and poems. In fact FIRE !! discusses all racial stereotypes in a fictional way. It should come as no surprise that the magazine is not appreciated by everyone. It is sold under the counter in Harlem. it is not for sale at all in Boston. W.E.B Du Bois – leading academic and human rights activist – distances himself from it. He deliberately does not pay attention to it in his magazine The Crisis, while he does so when other writers and poets publish new work. The generation gap is visible here. 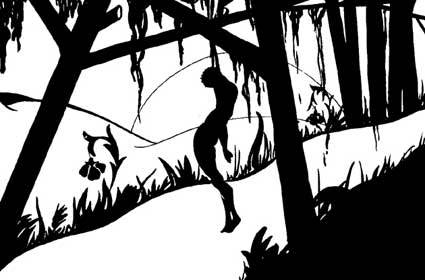 So falling in love with a Niggerrati is different from falling in love with an ordinary black actor. Barthé will find out soon. Richard Bruce Nugent’s biographer, Thomas H. Wirth, claims that they are unlikely to have had a sexual relationship and, if they were, that relation would not have had a long life. He gives a number of reasons for this. Nugent has a bad reputation when it comes to loyalty, Barthé is less free-spirited and struggles with that. Barthé is does not show off his homosexuality. He only mentions this in a small circle of friends. He is afraid it will negatively affect his career. Nugent does not have a problem to be open about it. He doesn’t bother about that at all. He boasts of his wild parties and exciting journeys. His classicist drawings – obviously influenced by the work of the controversial British artist Aubrey Beardsley – would still cause consternation even today. Whether Richmond Barthé has become a successful artist for those reasons and Richard Bruce Nugent has hardly ever been taken seriously, even worse, in most publications on the Harlem Renaissance his name is not even mentioned, I don’t know. It is tempting to underline that statement. 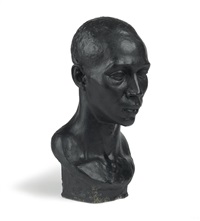 They have long remained friends, as correspondences show. They both live in New York in the 1930s and 1940s and they get inspired and stimulated by the same intellectual and artistic milieus, in Harlem and in the West Village in Manhattan. In 1947 Barthé moves to Jamaica. In 1960 he returns to the US and moves to California.
Richard Bruce Nugent dies in Hoboken in 1987, Richnond Barthé two years later in Pasedena, California.

Rob Perrée. art historian, independent writer and curator, founder and editor of Africanah.otg, lives and works in Amsterdam and Brooklyn.