The state or economies of the South African visual arts industry. 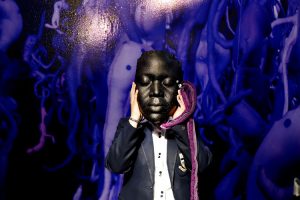 A Response to Goniwe’s Sour Pleasures of the Art World

In the wake of the “radical economic transformation” furor that has been happening in South Africa, art historian and curator, Thembinkosi Goniwe’s recently published article “The Sour Pleasure of the Art Industry,” in the Mail and Guardian newspaper, is a crucial intervention. The article came out on the Friday morning after the official opening of the Johannesburg Art Fair.

Mine isn’t a response but an iteration, or put differently, a “solidarity criticism” in what appears to be an interesting public provocation about the state or economies of the South African visual arts industry. These states or economies aren’t only financial, though finance is central to Goniwe’s remarks in the piece. He seems to suggest that white South Africans’ financial power, inherited from apartheid, over-determines accompanying symbolic wages of whiteness. 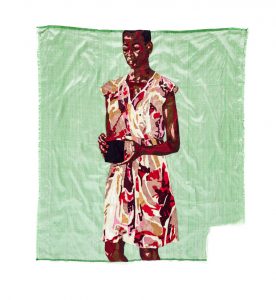 The general thrust of Goniwe’s article charges the local visual arts world of racial ventriloquism — invisible (white) hands, that “rent natives” as tokens and window dressing, whilst [t]hey remain in critical control of cultural means of production. He writes:

*
“My concern here is the common practice of white enterprises that rent natives for purposes of tokenism and window dressing, legitimacy and political correctness whilst alienating black professionals from the actual means of economic production and creation of wealth. This racial exclusion in the visual arts is most evident in the auction houses whose ownership, executive officers, specialists and operations are white business as usual. If black people are part of these companies, they mainly feature in peripheral and menial jobs.”

*
Maybe ventriloquism sounds a little harsher than Goniwe’s preferred terms like “tokenism” or “rent natives” as it presupposes a more direct or total possession. Though pressing for the substantive, in the proverbial Marxian expression of “means of production,” he seems somewhat acknowledge the tokenization as well. In the past, he’s similarly lambasted the same racist paternalism in the visual art space for reducing black practitioners to mere beneficiaries of the white liberal fraternity’s handouts. Taking advantage of the apartheid hierarchical and vocational discrepancies, whites occupied more prolific roles as researchers, teachers, writers, thinkers, and so on, whilst blacks occupied the fringes as “object makers.” Those few Blacks that were included, Goniwe warned, couldn’t dare question, and if they did, they’d be biting the invisible (white) hands that feed them. 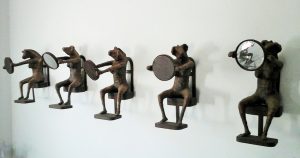 Today, however, by his own critical admission, changes, no matter how limited, are noticeable. Goniwe lists these visible changes, pointing to the slowly darkening physiognomy of big institutions (public and private) and the accelerated presence of black practitioners in international art arenas. As a result, this creates an increase in the need to “rent”, which in turn triggers the juridical guard of whiteness, and its pathological inclination to micromanage, and intimidate. After all, the metaphor of rent, even when thought in Marxist terms, far more than it being about profit, is a theory of control. In other words, the hiring of natives always becomes about their being turned into informants, thereby becoming the Black Faces of the status quo. The white backlash to the show From Pierneef to Gugulective (2010) by the then new director of South African National Gallery, Riason Naidoo, is a typical example amongst many. 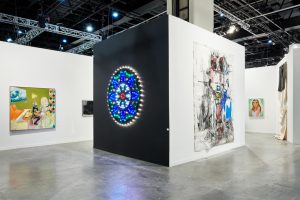 It is such that these changes of course, come at a price — that is, the one desiring change is also apparently required to change. Though latent in Goniwe’s own remarks, the local art world has never really carried out a sustained critical position towards the presumption of inclusion, and how it also informs the aspirational practices of black dissent. That is, forms of critical practice do not pay attention to the trappings of being included within an order or apparatai that doesn’t cancel its exclusionary habits by simply renting natives. It is partly this tentative and unquestioned desire for inclusion (one would say, the desire to be “changed”) that generates the ambivalence toward substantive change. The need for inclusion ultimately results in the asocial and depoliticized practices of the visual arts space.

We find, however, that inclusion has not actually done away with the primary cause of the exclusion: white supremacy. If anything, the paradox of inclusion and/as integration is that it has also facilitated the actual normalization of exclusion. So, whites remain not only the self-recycling constant which blacks optimistically orbit around, but also the very agents of change or transformation. Consider today how decolonization has been institutionally ratified, and how it is used to religitimate the same kinds of practices that brought it about. Whiteness is like what Slavoj Zizek calls “chocolate laxative”: it’s both the problem and its antidote. Artist David Koloane once observed that the 1990’s obsessive embrace of such terms as “post-apartheid era” were always heralded by the same beneficiaries of apartheid. That justice for blacks is structurally foreclosed from its inception gets lost in the relativistic ledgers found in Goniwe’s piece. 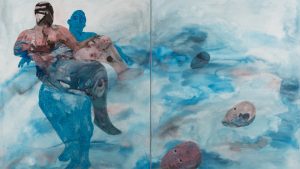 Florine Demosthene, The Stories I Tell Myself, 2018. Image courtesy of the artist and Gallery 1957, Photo Nii Odzenma, at Joburg Art fair, 2018

There’s no reprieve, Goniwe tells us, and as such, black professionals can only speak of their suffering in whispers. Yet, he reflects, “[I]t is such whispers that we also find in the critically reflective artworks of black artists, artworks most of which that are however sterilized and cleansed of the black politics, black agony, black struggle, black rage, black death.” Here, whispers could also mean, in the absence of whites. Is the imperative to clean these narratives of pain and anger still the impulsive prerogative of power? What about those moments when whites unsolicitedly acknowledge their culpability and privilege? What do these moments signify in public discourse? The irony is that it is exactly during these encounters that acknowledge black immunity to pain as a colonial myth, that black suffering is reconquered.

*
Black pain isn’t always out of the reach of those who repetitively cause it. Rather it is readily available, and rapidly circulated with the same stroke that inaugurates it. Power, eagerly siphons its rawness and pawns it off onto the market like the many other objects on the commodity line. The more boisterous the Black artist, the more institutions want them, and the more they want to be institutionalized. This is the infernal cycle, the noose of black existence Frantz Fanon talked about. 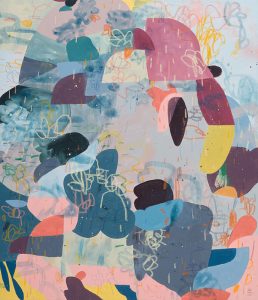 It is the tokenization of the radical impulse itself. A different form of institutional coercion, which does not proceed, as before, by way of a disavowal but delegation of narratives of pain and rage. In fact, art institutions, private and public, have shown more interest in pervading radical rhetoric — and certainly in works that reflect pain and rage — with the hope that once its legibility is established and apprehended, it is simultaneously violently interdicted. The point is also not to deemphasize our rage and pain, but to stress what kinds of resultant ramifications that discourses of inclusion and agency enable within institutional parameters. Sterilization isn’t always predicated on an a priori prohibition of radical interruptions (be they political or artistic), but sometimes on their legitimation for institutional consumption and deceleration.

*
That the art world is structurally detached and asocial doesn’t mean that it’s not parasitically/monstrously connected to black suffering. If anything, black experiences are both creative stimulants, whilst also paradoxically enabling a kind of political anesthesia. This makes cultural thinking about political power rather dubious, if not outright reactionary. Though largely critical of the status quo, some of Goniwe’s fatalistic optimism sometimes appears as if he’s temporarily forgotten that the new South Africa is established precisely as a hindrance for black people. The raucous repudiation of the relatively liberal demand for “radical economic transformation,” has exposed in many ways, how even minimum change is impossible within the current situation. We must accept that the structural-adjustment of black art professionals and public servants too, diminishes whatever power they might have. Thus, Goniwe’s closing remarks on the civil servants as somewhat a savoir, isn’t in the main, going to address the fundamental problems of blacks as structurally annulled existence because his or her own agency is similarly curtailed. We can no longer whinge at the site of such unreflexivity, but we must mourn. Our responsibility, perhaps, is to sit with the fact that “post-apartheid era” is sadly a borrowed site where blacks live in freedom but only as tenants, and that is the basis of our collective vulnerability.